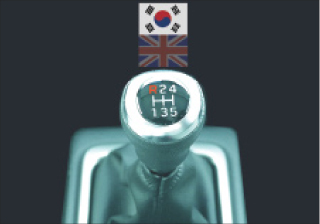 Rolls Royce, Bentley, Aston Martin, Lotus, Jaguar, Land Rover and Mini are some of the car brands originating in the United Kingdom. But they are now sold to German, U.S., Chinese and Indian companies. There is not a single automobile brand owned by a British company today.

As the leader of the industrial revolution, the United Kingdom was the biggest automobile exporter some 50 years ago and dominated the global car production with the United States. But the United Kingdom produced 1.81 million cars last year, much less than Korea’s 4.23 million and even less than Thailand’s 1.94 million.

Falling productivity also affected the fall of the British automobile industry. The Labour Party won the 1950 general election and promoted regional development policies. British carmakers divided their manufacturing plants and spread them out across Liverpool, Wales and Scotland. The increase in production cost was a natural consequence as the industry required large-scale production facilities. The European Economic Community lowered the tariff in the region, but the United Kingdom set tariff barriers and lost the price competitiveness.

Korea’s situation is similar. In the past 10 years, the cost of popular Korean cars nearly doubled, largely because of rising labor costs. Five Korean carmakers put in an average of 26.4 hours of labor per car, the longest among the competitors. The Hyundai Motors Group had operational profits of 9.2 percent in 2011, but this fell to 4.7 percent last year. The inefficient labor-management relationship is also another common factor. In the United Kingdom, one company had more than 10 unions. Similarly, Hyundai Motors union has about 10 factions. In the United Kingdom, releases of new models were often delayed due to labor disputes. Hyundai Motors had to delay the production of Kona in July as their union’s consent came late.

When the company was put up for sale due to sluggish performance, the U.K. automobile unions pressured management to choose a buyer that guaranteed employment to take over the plants. After five decades of progress, the Korean automobile industry is about to go 50 years back in British time.

*The author is a deputy editor of industrial news at the JoongAng Ilbo.