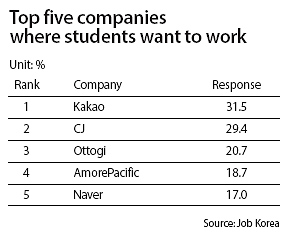 Kakao, the tech company behind the country’s most popular messaging app, is the most desirable workplace among Korean university students, according to the results of a survey released Friday by the job site Job Korea.

Among 1,879 students attending four-year universities or graduate schools, 31.5 percent said Kakao was their dream company among the top 100 in Korea by market capitalization. Multiple answers were allowed.

The preference for Kakao turned out to be strong not only among students who wanted to work in tech and media, the company’s main businesses, but also those hoping to work in management, design, marketing and research. Even half of respondents who were unsure of their career direction said they wanted to work for the tech giant.

The result is notable considering the top spot has traditionally gone to established conglomerates like Samsung Electronics and CJ. Job Korea, which has been conducting the survey since 2004, said relatively newer tech companies like Kakao and Naver were added for the first time this year.

CJ was second on the list, attracting 29.4 percent of respondents. Ottogi ranked third, with 20.7 percent, and AmorePacific and Naver followed with 18.7 percent and 17 percent each.

Samsung Electronics was sixth with 14.3 percent.

The preferred companies differed by gender, though Kakao came out on top for men and women with 22.3 percent and 39 percent of votes.

This is the first time Ottogi has ranked among the top five. The company’s public image saw a huge boost this year for its charitable contributions and ethical management practices.

“Kakao and Ottogi joining the top tier of desired companies seems to be the result of job seekers valorizing company image and office culture,” a Job Korea spokesman said.

In the survey, 24.8 percent of female respondents said a company’s positive image and favorable culture were the main reason for their choice.

For male respondents, the same answer came second at 21.2 percent, slightly smaller than the response for high salary, which ranked first at 23.6 percent.