Beautuber ‘Pony’ reflects on her rise

Beautuber ‘Pony’ reflects on her rise 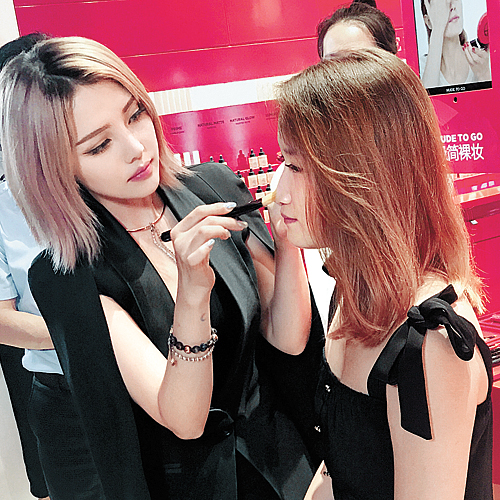 “Pony” working as a makeup artist at a beauty event in China. [PONY'S MAKEUP INSTAGRAM]

“If there is even one speck of dust on the face, I re-do the shoot,” said Park Hye-min, Korea’s popular beautuber (Beauty YouTuber), whose channel, “Pony Syndrome,” has more than 3 million subscribers and who boasts 4.2 million followers on Instagram (@ponysmakeup). We sat down with Park to discuss the fashion and beauty industry in Korea, her success and her advice on how to make it as a social media beauty guru.

Q. Why do you think your YouTube channel has become such a hit?

A. I went with the flow. From blogging, to YouTube, and now to Instagram, I think I did a good job in switching to different social media platforms, whenever a new one gained widespread attention and use. If you observe closely, there is a time period when a massive amount of people switch from one social media platform to another. Because communication with my followers and subscribers is important to me, I’m constantly analyzing which media platforms the general population is leaning towards.

When did you start gaining widespread attention through makeup?

I started really getting into makeup during my last year in high school. In 2010, I made blog posts about makeup appliances and released a book titled “Pony’s Secret Makeup Book.” At that time, there were no makeup books by Korean makeup artists, so it was quite a challenge to create one. I released a makeup book every year since, but I noticed a gradual decline in demand. In 2013, I began looking for a new method to spread knowledge about makeup.

Is that why you started making videos?

That’s right. There were no Korean beauty gurus on YouTube at the time. Unlike conceiving a blog post, which I was familiar with, I didn’t know where to start with making videos. With the intention to fulfill a challenge, I started creating videos. Since 2015, I’ve been running an independent YouTube channel, which is now known as “Pony Syndrome.”

What do you think is the most important aspect when making a YouTube video?

I’m always considering what would appeal most to my followers’ and subscribers’ tastes, and how to give them feedback. Makeup skills are important, but communication with your followers and subscribers is more important. When people believe that there will be new content whenever they go to your channel or board, the inflow of followers won’t stop. Quality is also important. Nowadays, many watch YouTube through high-quality TV, so people prefer perfectionists when it comes to makeup videos. After filming one cut, I check it thoroughly before moving on to the next.

Where do you generally get your ideas?

I thoroughly read my subscribers’ or followers’ comments to get a hint of what I should do next. You learn the general makeup look and preference people have when you read the comments.

Do you have other plans besides creating makeup videos?

Currently, I am working on a project called “Pony On-Air.” Anyone can be a part of this project by contacting me and letting me know their worries or troubles. I will go directly to them and listen to their problems, while also trying to help find solutions for them. For the first episode, I am trying to get in contact with someone who is concerned about something other than makeup. It’s a way for me to hear out people’s daily problems, other than those regarding beauty.