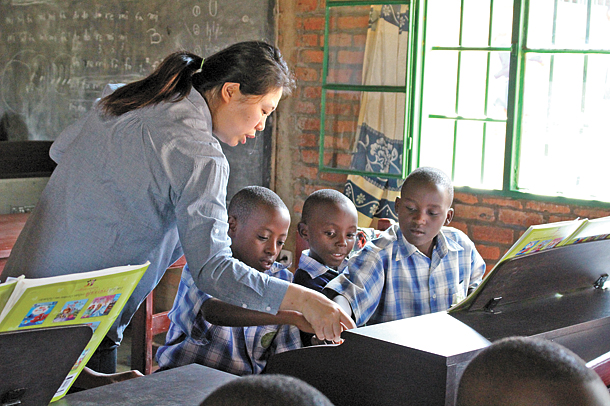 A woman cries relentlessly as she leaves an orphanage in Cambodia. Her volunteer term has come to an end and she must return home to Korea. Now, a few years later, Kim Jung-im, a former English school and prep school teacher from Korea, finds herself entering the Rwanda Education Board in Kigali, the nation’s capital.

Since April, Kim has been volunteering with the Rwanda Education Board, teaching piano to school teachers. According to Kim, there is currently no one in charge of music education at the schools.

“My parents were very worried that, I, a woman at that, would be going to Africa to volunteer for two years,” Kim says. “Sometimes, Rwanda does feel like South Korea in the 1960s-70s, but unexpectedly, the internet connection and Wi-Fi are really good here.”

Kim did not initially seek to volunteer in Rwanda, but realized her passion for volunteering through an experience she had in Cambodia.

“No matter where I was placed, I just wanted to help,” she says. In college, Kim studied trombone and served as an elementary school music teacher for three years before becoming an English teacher. She also volunteers as a choir conductor at Remera Catholic Primary School, through World Friends Korea, a government-run overseas volunteer program.

Music has traditionally been passed down orally in Rwanda. “The children follow along the folk songs adults sing,” Kim says, “and sing along to other songs that foreign non-governmental organization (NGO) volunteers teach.”

After the Belgian colonization in 1962, tribal conflict between the Hutu, a Bantu ethnic group and the country’s largest social group, and the Tutsi, also a Bantu ethnic group, intensified. Belgians taught that Tutsis were superior to Hutus, fomenting strife between the groups, culminating in the genocide of 1994 in which Hutu government members slaughtered an estimated 800,000 Tutsi people in the span of 100 days.

But, says Kim, Rwanda is healing. “I have yet to hear anyone singing sadly in Rwanda,” Kim says.

But there is growing criticism aimed at Korean overseas volunteer programs because the motive of many young Koreans for volunteering is to gather specifications, or “specs,” for career advancement. Nevertheless, Kim believes “As long as volunteers remember that everyone is their equal, anyone who volunteers with passion will be of assistance.”

Kim’s volunteer period in Rwanda ends next April, but she is considering extending her time to prepare the children for a choir competition next March.