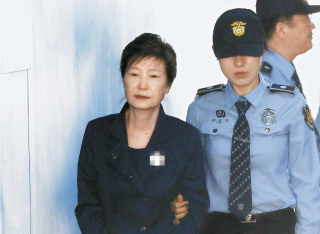 Former President Park Geun-hye is taken to court for a hearing on Friday. The Seoul Central District Court on Friday issued a new warrant to the prosecution to hold her for another six months until April 16. [YONHAP]

A local court decided Friday to extend the physical detention of former President Park Geun-hye, issuing a new warrant to the prosecution to hold her for another six months until April 16.

The Seoul Central District Court completed a hearing Friday afternoon on the prosecution’s petition to hold Park longer during her criminal trial. Park was supposed to be released in a few days as the six-month mandate of the detention warrant expires at midnight on Monday.

Park, Korea’s first leader to be removed from office, is standing trial for bribery. Although she did not receive money directly, prosecutors concluded that she received bribes from conglomerates in collusion with her longtime friend, Choi Soon-sil. The total amount of bribes cited in her indictment in April was 59.2 billion won ($52.04 million).

Her criminal trial, however, is not finished. Hearings of witnesses are scheduled until the end of the month. With the new warrant, Park will likely remain in the custody of the Seoul Detention Center until her criminal trial ends.

According to the law governing criminal litigation, prosecutors are allowed to seek a new detention warrant with new charges. When Park was detained on March 31, the prosecution used a charge that Park had received bribes from Samsung Group in return for her political influences. The prosecution used new bribery charges involving Lotte and SK Groups to seek the new warrant.

Although the court held four hearings a week for a speedy process, the trial went on for months, as Park is facing at least 18 charges. The indictment paper alone is 154 pages, and the prosecution’s investigation records are over 120,000 pages long. “We have never seen a trial of this magnitude,” a senior judge told the JoongAng Ilbo. “It involves a former president, top presidential aides and owners of conglomerates. Most of them deny charges, so it would have not been easy to operate the trial.”

The prosecution, therefore, had to call witnesses to the courtroom to make testimonies, and 75 were questioned so far. As of now, about 300 remain on the witness list submitted by the prosecution.

Meanwhile, the Blue House said Friday that it has asked the Supreme Public Prosecutors Office to launch an investigation into the allegation that the former administration doctored a daily log of the crisis management center on the day of the Sewol ferry’s sinking in order to cover up Park’s slow response to the deadly accident. In the petition, the Blue House also requested the prosecutors to investigate that the crisis management manual of the government was illegally revised following the ferry disaster.

The petition was based on the bombshell revelation made Thursday. Presidential Chief of Staff Im Jong-seok held an urgent media briefing and announced that the Park Blue House had doctored documents on the Sewol Ferry’s sinking, including when Park received the initial report on April 16, 2014. The ferry, carrying 476 people, mostly high school students on a field trip, capsized on its way to Jeju, resulting in the deaths of 304 people. The Park administration’s slow response to the tragedy invited much criticism.

Park, who took office in February 2013, was impeached and removed from office in March for allowing her friend to interfere in state affairs for private gains. While the Constitutional Court rejected the National Assembly’s arguments that Park should be removed for having failed to fulfill her duty to protect the lives of citizens during the ferry accident, her absence for the first several hours of the disaster has become a matter of national controversy.

He also said a paper trail was found showing that the crisis manual was changed without proper legal steps. Although the National Security Office of the Blue House was responsible for responding to the ferry accident in April 2014, the manual was changed illegally three months later to put the Ministry of Security and Public Administration in charge of the crisis management operation.