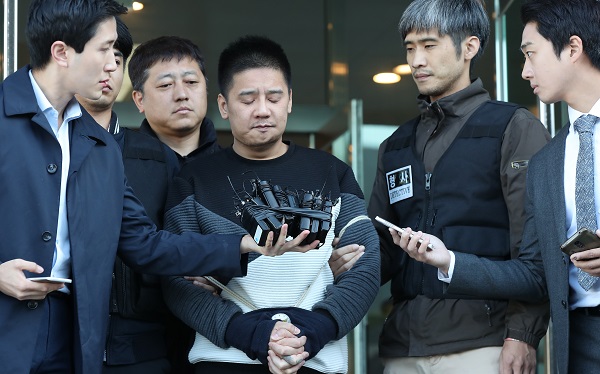 Lee Young-hak, who was accused of killing his 14-year-old daughter’s friend late last month, is questioned by reporters at Jungnang Police Precinct in Seoul on Friday before being handed over to the prosecutors’ office. [YONHAP]

Lee Young-hak, also known as “Molar Daddy,” told police he sexually assaulted the 14-year-old friend of his daughter and strangled her to death.

Police said Lee, 35, assaulted his daughter’s friend at his home in Jungnang District, eastern Seoul, on Sept. 30 after giving her sleeping pills.

He said he strangled her to death with a tie the next day when she woke up and tried to fight back. Forensic officials had confirmed the victim died of strangulation.

Lee then put the body in a suitcase, which he and his daughter left at a mountain in Yeongwol County, Gangwon.

“I am sorry,” Lee told reporters in front of the Seoul Northern District Prosecutors’ Office on Friday. “I have not been myself since my wife died. Everything feels like a dream to me right now. I will accept my punishment.”

Lee’s 14-year-old daughter had invited her friend to her home on Sept. 30, asking her to watch movies together. She then handed her a beverage containing sleeping pills and left the house for a few hours, as her father had directed her to do, police said.

“The daughter knew that the drink was spiked, and she told police she gave her friend two more sleeping pills after the friend finished the drink,” police said.

“The daughter knew that what she was handing over were sleeping pills that her father took when he couldn’t sleep. When authorities asked her why she did this, she said she felt it was something she had to do.”

“It seems that Lee was the world to his daughter,” said a profiler who talked to the daughter. “She would think that the world would end if her father didn’t exist.”

Her mother committed suicide on Sept. 6 and left a note that said she had been raped. Five days earlier, she had sued Lee’s stepfather for several counts of rape since 2009. Police said they would reinvestigate the case.

Critics question if police reacted too late in the initial investigation after the victim was reported missing by her parents. The victim’s parents had dialed 112 to report their child missing on Sept. 30, but the first time police visited Lee’s home in Seoul was on Oct. 2.

“We admit that we could have saved the victim if we had responded faster and decided earlier in the investigation that the case was not a simple teenage runaway case but one concerning an abduction,” said a police officer during a press briefing on Friday.

Police went through CCTV footage around the suspects’ house and saw that the victim went inside near noon, but had not come out. Lee and his daughter were caught on camera the next day carrying a large black suitcase and loading it into a car parked outside their home.

Police tracked Lee and his daughter on Oct. 5 to a villa in Dobong District, northern Seoul. Both were unconscious from an overdose of sleeping pills.

A tablet PC placed nearby had a video on it in which Lee claimed the victim accidentally swallowed sleeping pills during her visit to his house and that he had dumped the body out of panic.

Police also charged a 36-year-old surnamed Park, who had provided Lee with the villa, for harboring a suspect.

Lee is better known in local media as “Molar Daddy,” a nickname he picked up after appearing in several TV programs since 2006, most recently last February, to talk about his rare genetic disorder and raise money to treat his daughter, who has the same condition.

Gigantiform cementoma, a hereditary tumor that causes disfigurement of the jaws and teeth, left him with one molar tooth, earning him the nickname.

In 2007, he published a book titled “Molar Daddy’s Happiness.”
Lee was also found to be the owner of a massage parlor in Gangnam District, southern Seoul, linking customers with prostitutes online and later secretly video-recording them having intercourse.

On Thursday, authorities made the rare move of officially disclosing Lee’s full name and face, saying the decision was based on the people’s right to know.