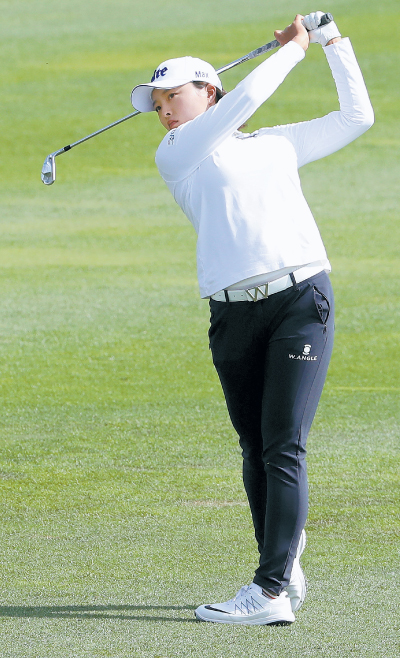 Ko Jin-young watches her shot during the final round of the 2017 KEB Hana Bank Championship at Sky 72 Golf Club’s Ocean Course in Incheon on Sunday. [NEWS1]

Ko Jin-young captured her first LPGA Tour victory at the 2017 KEB Hana Bank Championship, which was held at the Sky 72 Golf Club’s Ocean Course in Incheon on Sunday.

Despite Ko’s two-shot lead before the final round, Park Sung-hyun easily took the lead after Ko made bogeys on the second and third holes.

While Ko was two shots behind Park on the par-five seventh, a five-meter (16.4 feet) birdie putt allowed Ko to get within one shot behind Park.

Ko continued her round with her accurate iron shots. Following a birdie on the seventh, Ko made back-to-back birdies on the eighth and the ninth to take the sole lead at 17 under par.

In addition to Ko’s birdie on par-three 12th, her victory came down to the par-four 14th, where Ko made an up and down for a par but Park missed a one-meter putt for par, which allowed Ko to extend her lead by two.

On the par-four 15th, after Park missed her putt for eagle, the victory was in Ko’s grasp.

“I’m honored to earn a LPGA Tour card,” Ko said. “And I’m glad that I got to win my first LPGA Tour event in front of my fans.”

Prior to Ko’s victory, her best result at an LPGA tournament was a runner-up finish at the 2015 Ricoh Women’s British Open. Ko may not be a familiar name on the LPGA Tour, but the 22-year-old is famous among the domestic golf fans.

Though Ko won a tournament in her rookie season, she failed to win the rookie of the year award, finishing behind Baek Kyu-jung, and in her second year on the KLPGA Tour, Ko managed to win three tournaments but was overshadowed by Chun In-gee, who won five tournaments and the U.S. Women’s Open as a non-LPGA Tour member in 2015.

Last season, Ko continued her success by winning three tournaments and the player of the year award, but it was Park, who won seven tournaments and led in a long list of statistics, that got most of the attention.

In addition to the winning purse of $300,000, the victory gives Ko an automatic seed in the LPGA tour for the 2018 season as well as the tenth victory in her career. Ko is the fifth non-LPGA Tour member to win the tournament.

“I have not yet decided if I want to go to the United States,” Ko said. “I want to go, but I’ll need to carefully think if I’m ready.”

With a birdie on the last hole, Park finished runner-up at 17 under par. For Park, a victory could have help her grab the No. 1 world ranking, as Ryu So-yeon finished tied for eighth at ten under par.

Chun had to step back from a victory for the sixth time this season, shooting a three under-par in the final round to finish third.

Carlotta Ciganda of Spain, the defending champion, finished tied for eighth at 10 under par.

The KEB Hana Bank Championship started in 2002 and Korean golfers have won it a total of ten times.

The only LPGA Tournament held in Korea, the KEB Hana Bank Championship saw a total of 31,726 spectators come out to the course on Sunday - a number greater than the crowd at the second round of the KBO playoffs held at Sajik Baseball Stadium in Busan held on Sunday.

This year, the KEB Hana Bank Championship became the first golf tournament in Korea to see over 60,000 spectators attend.

Starting Thursday, the LPGA Tour will continue its Asian swing at the Swinging Skirts LPGA Taiwan Championship presented by CTBC.