Twins hope for a better 2018 as new manager joins club

Twins hope for a better 2018 as new manager joins club

After announcing Ryu Joong-il as their new manager immediately after they crashed out of the regular season on Oct. 3, the LG Twins held an inauguration ceremony to welcome their new skipper at Jamsil Baseball Stadium in Seoul on Friday. 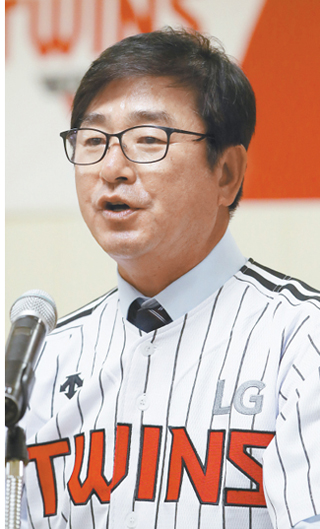 “I had a lot of thoughts and consideration before finalizing my offer,” Ryu said at the ceremony on Friday. “But I didn’t want to miss an opportunity to manage the Twins, the elite and most popular team in the KBO.”

Ryu’s new position at the Twins will be the first time in his 30 year career that he won’t put on the Samsung Lions’ uniform every day, having played for the team from 1987 to 1999 before returning to as a coach in 2000. When playing for the Lions, Ryu had a 0.265 batting average. Ryu initially returned to the team as a base-running coach before being elevated to manager in 2011.

While managing the Lions, Ryu led the team to both regular season and Korea Series victories in four consecutive seasons, starting in 2011. Then, in 2015, the Lions lost the Korean Series to the Doosan Bears. In 2016, when the Lions finished ninth out of the ten clubs in the KBO, Ryu left the Lions.

But now, Ryu returns to the KBO after a year off, signing a three-year deal with the Twins worth 2.1 billion won ($1.86 million) with a 600 million won signing bonus. He hopes his managing experience will help the Twins climb back up the league.

Since the 2015 season, the Twins have tried to shake things up. During the inauguration, Ryu showed strong determination to successfully rebuild the team.

“I think the very first thought I had was to continue the rebuilding process that the Twins had been doing for the past two to three years and the new coaching staff has to continue this,” Ryu said. “Through friendly competition, I’ll lead the team to the championship.”

Unlike the 2016 season, when the Twins managed to advance to the postseason with a squad packed with younger players, this season they failed to live up to expectations. Though Ryu does not have a detailed coaching plan for the Twins, he will first examine each and every player on the team.

“There is pressure,” Ryu said. “But the managers speak only by the results of the team.”

Looking at the coaching staff, Ryu once again showed his goal is to strengthen the existing team, not create a new one, as he hasn’t made any significant changes to the staff. Rather than recruiting a new pitching coach, Ryu decided to go along with Kang Sang-soo.

“This season, the Twins were ranked first in terms of ERA, [at 4.90],” Ryu said. “It may be more dangerous to change the pitching coach.”

In addition to Kang, a number of coaches are expected to continue with the Twins, as Ryu’s primary goal is to successfully rebuild the team.

“There are a number of coaches with great abilities,” Ryu said. “The addition of foreign coaches will be decided after I discuss it with general manager, Yang Sang-mon.”

Since the futures league players are nothing like the starting players, as their playing style can’t easily be determined through records and footage, Ryu seems happy to make minor changes to the team rather than bringing in an entirely new coaching staff.

“My favorite word is confidence but I hate self-sufficiency,” Ryu said. “I’ll emphasize the two words to the players.”

And these two words seem to go along perfectly with the Twins’ players. A number of players, who became starting players only in their second or third year playing full-time, have had a disappointing season. As a result, fans are worried that the players may have lost their drive and passion.

While the Lions dominated the KBO for four seasons, Ryu showed great balance between the younger and older players, as he tried to give as much opportunity to younger players as well. However, though it’s good to gain confidence, Ryu emphasized that the players shouldn’t get full of themselves.

Ryu’s success in rebuilding the Twins will strongly correlate with his term as the manager. As there is only so much he can do with new additions, Ryu’s top priority has to be strengthening the existing players and preparing for a better performance next year.

“This is the most exciting challenge I’m had in my 30 years of baseball,” Ryu said.