How Bluehole defied the odds with Battlegrounds

How Bluehole defied the odds with Battlegrounds 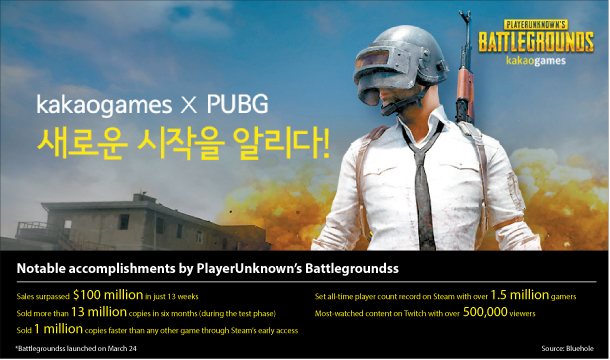 PlayerUnknown’s Battlegrounds, also known as PUBG, has become one of the hottest games on the market, gaining traction in Korea and globally despite still being in the testing phase.

After breaking records one after another, Bluehole, the game’s Seongnam-based developer, is preparing to officially launch the game in Korea before the year ends through a partnership with Kakao Games.

Battlegrounds, a multiplayer online battle royale where up to 100 people fight in a large-scale last-man-standing death match, was made available to players for beta testing on March 24.

It didn’t take long for the game to catch on. More than 400,000 copies were sold in the first three days, raking in $11 million for the Korean game developer. By September, more than 12 million copies were sold, and the profit from Battlegrounds well exceeded $100 million. 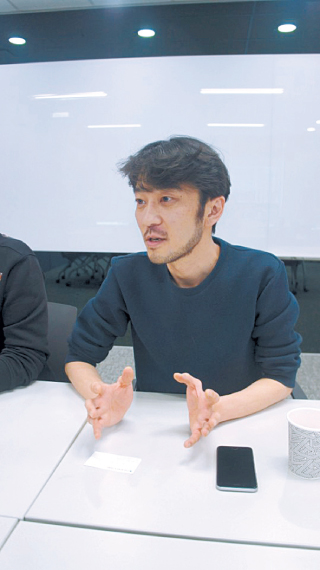 The game has put Bluehole on the map. According to Bloomberg, the company’s value jumped fivefold in the wake of the success of Battlegrounds to 5.2 trillion won ($4.6 billion).

Bluehole’s first tasted global renown with Tera, a massively multiplayer online role-playing game with some 25 million global players, though the size of the success is no match to that of Battlegrounds.

The studio was founded in 2007 by Chang Byung-gyu, who was recently appointed to lead President Moon Jae-in’s committee on the fourth industrial revolution. Chang is considered somewhat of a legend in the Korean start-up world. Before Bluehole, Chang established four companies, including Neowiz, which developed a program to simplify connecting to the internet, with a friend in 1996.

While Battlegrounds’s success seemed to come overnight, it was a laborious journey for the game’s developers. The project started in early 2016 with just 20 programmers, and Kim Chang-han, executive producer and product manager of the game, said the beginning was all but smooth.

“Game development in Korea tends to pursue appealing [to the general public], so many people objected when we decided to develop a battle royale genre [which is unfamiliar to many Korean players],” said Kim, who also serves as vice president at Bluehole, “so we had to turn our eyes to the global market and realized there was in fact demand for games of distinct genres [like battle royale].”

Since it was difficult to find a local developer with experience in this type of game, Kim searched abroad for a partner and recruited Brendan Greene, a developer from Ireland who goes by the pseudonym PlayerUnknown. Kim explained that Greene had “originality” and skill in developing battle royale games.

“It was difficult for us to set specific targets or goals at the beginning,” Kim said. “We had to collect as much data as possible and communicate with the company [management] constantly.”

Their efforts have not gone to waste. In addition to promising sales figures, the game also passed another meaningful milestone: the number of simultaneous players on Battlegrounds reached over 1.5 million at one point, notching more players than any other game on Steam, an online game platform, and topping big titles like Counter Strike Global Offensive and Dota2.

When asked what enabled such success, a studio manager cited Kim’s ample experience. The developer has had his fair share of trials and failures in the gaming industry in the past 17 years. He produced numerous games, but none of them did very well.

Another developer at Bluehole said timing played a major role in Battlegrounds’s performance.

“The fact that a new genre of online games started to be developed and popularized throughout the world was a crucial factor,” he said. “The game gained more public exposure through Twitch [an online video broadcasting site for games], also a crucial element to the game’s success.”

Battlegrounds became the most-watched game on Twitch, gaining 500,000 views at one point, more than other popular games like League of Legends.

“The decision by Bluehole to release the game for early access through Steam, which made the game accessible globally, was a game changer,” an industry source said.

Now armed with a huge following, Kim and his team say maintaining components and attributes unique to the battle royale genre will be keys to sustaining the momentum. Some gamers have called for more variety of content, including types of vehicles they can operate and a better matching system.

“The crux of the fun of the game is being able to play with multiple players and with your friends,” said Lee Seung-keun, a local gamer. “But compared to other games like League of Legends, the matching and grouping system is not entirely straightforward.”

Kakao Games, the partner for the domestic release of Battlegrounds, said in a recent press conference that it would work with Bluehole to optimize the system and content for Korean players before officially launching the game here.