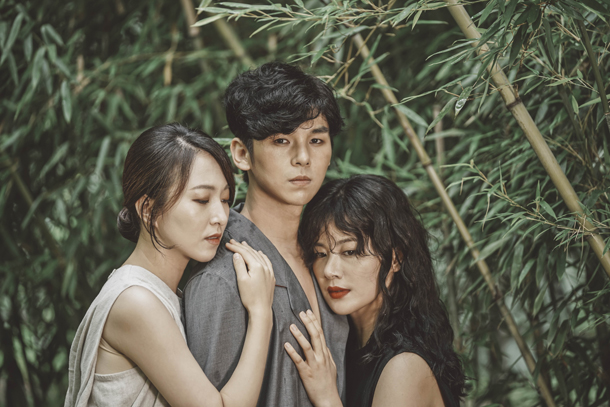 Uncontrollable human desire doesn’t stop amid extreme war. Based on a play written by Cha Beom-seok, “The Wildfire” shows the intensity of human instincts through the traditional sounds of Korea from the National Changgeuk Company.

Through this changgeuk (traditional Korean opera) performance, according to the company, the audience will be able to witness how human beings behave according to their animal instincts during war. The story is set in the winter of 1951, while the Korean War rages on. A youthful man named Kyubok hides himself in countryside of Jiri Mountain, where only senior citizens and widows live. There, a widow named Jumrye helps Kyubok hide, which is how their deep relationship begins. At the meantime, another widow from neighborhood, Sawol, finds out that Kyubok is in their town and suggests taking care of him together, which becomes a point of conflict between the neighbors.

Interestingly, two actors are cast to play Kyubok; one actor depicts the image of a tender and soft guy (played by Kim Jun-soo) while the other has a tough and masculine image (played by Park Sung-woo).

For the upcoming production, which kicks off on Oct. 25 at the National Theater of Korea in central Seoul, the company focused on designing a spectacular stage design that will surely dazzle audiences.

More than 1,000 real bamboo trees have been installed to create a bamboo forest, and a life-sized crashed plane will also take center stage, according to the company. Lee Tae-seop, the stage designer said, “As a person handling space, having ‘The Wildfire’ in this grand theater means a lot to me. The most important factor of theater is to create an intimate feeling between actors and the audience, but here, we can rather show spectacular things. I tried to maximize visual factors by using a rotating stage so that it can physically come closer to the audience.”

Music is also another important element of changgeuk. Music producer Jang Young-kyu, who is famous for scoring the movies “Train to Busan” (2016) and “The Wailing,” (2016) has scored songs that have their roots in pansori (traditional Korean opera) but have been re-imagined with sounds of minyo (a genre of traditional folk songs). “I composed songs that only Changgeuk Company could absorb,” said Jang.

In “The Wildfire,” Jumrye and Sawol are the ones that lead Kyubok by confidently manifesting their love for him. Ryu Ga-yang, plays as Sawol, said, “Sawol’s characteristic of being honest with her feelings was both attractive and scary as an actress. I have a mind like Sawol, but I can control myself.”

Together with director Lee Sung-yul, art director and actor Kim Sung-nyu and music producer Jang Young-kyu, “The Wildfire” will be the final large-scale performance staged at the Haeoreum Grand Theater of the National Theater of Korea before it is closed for renovations until 2019.

“The Wildfire” will premiere on Nov. 25 and will run until Nov. 29. For more information, visit www.ntok.go.kr.