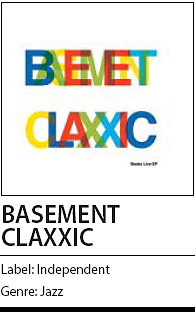 Under singer JK Kim Dong-uk’s lead, a jazz project named “Basement Claxxic” has released an album that will delight both pop and jazz fans.

It has been six years since the release of Kim’s first jazz album “Pianto” on which he reinterpreted famous pop and jazz tracks from Michael Jackson, Elvis Presley, Frank Sinatra and Michael Bolton to the standard jazz styles.

He collaborated with Korea’s best jazz musicians in a one-take live studio recording. With jazz being relatively unfamiliar to the public at large, Kim hopes to grow the audience with his latest album.

His album includes five songs that audiences may be familiar with, including the jazz classic “Always on My Mind,” on which listeners will be able to hear the artist’s soulful voice in harmony with piano, a saxophone, drums and other instruments. Including the instrumental versions which can only be heard on physical copies of the album, there are total of 10 tracks for both fans and newcomers to jazz to enjoy.