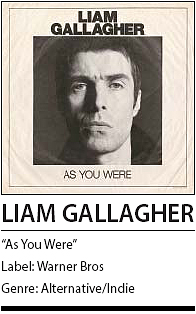 As swaggering frontman of 1990s British titans Oasis, Liam Gallagher understood that rock stardom is three-quarters attitude - and, in his case, one quarter love of The Beatles.

Gallagher’s burning bravado fuels his solo debut “As You Were,’’ an invigorating rock ‘n’ roll record that shows he remains cheerfully in thrall to the Fab Four.

The album, written by Gallagher with in-demand songwriters including Adele collaborator Greg Kurstin, makes sharp use of Liam’s strengths. The strut, the sneer and the soft-centered love of a good tune are all on prominent display.

Gallagher’s nasal voice is still among the most distinctive in music, and it’s deployed on hooky tracks produced with robust sizzle, crunch and thump. There are fuzzy guitars, woozy harmonies, horns, handclaps - even a “Sgt. Pepper’’-style fanfare on “When I’m in Need.’’

That’s the thing about “As You Were.’’ You could see it as 1960s pastiche in modern-day packaging. But it’s done with such brazen verve that many listeners won’t care.