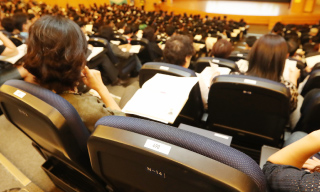 People who took part in a committee to determine the fate of two nuclear power plants listen to a briefing by the host on Sept. 16. [YONHAP]

Fire, when first discovered 1.4 million years ago, was probably a danger far more serious than today’s nuclear energy. If the human race avoided fire for its danger, there would be no civilization. Civilization advanced by controlling and utilizing dangers. The best way to deal with fear is not avoiding danger, but advancing science. Science can conquer fear. We must not let fear destroy science.

Accumulating the dangerous technology of nuclear energy was Korea’s way to survive as a small land with scarce resources. Over the past six decades, Korea’s technology developed to succeed in the localization of nuclear power plants and achieved the world’s best quality in safety, price, operation rate and construction period without a single deadly accident.

With such technology, construction began for the Shin Kori 5 and 6 nuclear reactors after a decade of strict evaluation and legitimate processes. It was a kind of violence to suspend their construction overnight just because the administration changed. The construction of the two reactors progressed 30 percent, and 1.6 trillion won ($1.42 billion) was already spent. Without any legal grounds, the Moon Jae-in administration temporarily suspended the construction with a government order. It will likely invite an investigation for abuse of power once this administration is over.

The construction was suspended for nearly 100 days. During this period, science was insulted, industry was destroyed and academics disappeared day after day. The government continuously tainted the industry which will bring about tens of trillions in foreign currency from exports and create jobs for tens of thousands of people. This is truly a violence against the people’s livelihood.

Although an opportunity to export nuclear reactors to Saudi Arabia for over 10 trillion won opened up, the Ministry of Trade, Industry and Energy is making an absurd excuse that exporting the technology requires the approval of the United States. The United Kingdom once reviewed a plan to import Korea’s nuclear reactor technology, but turned to China, amid Korea’s controversy surrounding a policy on nuclear phase-out.

A special delegation from the Czech Republic, which inspected Shin Kori 2 and 3 last week, was reportedly astonished by the excellence of the technology.

Their only concern was if it was safe to purchase the Korean nuclear plant technology if the supply chain of components, facilities, technology and manpower will be disrupted by the suspension of the construction of Shin Kori 5 and 6. Instead of easing their concerns, the government is repeatedly stressing its nuclear phase-out policy. I wonder how it will be able to seek redemption in the future.

At the three-day discussion of the public panel, just wrapped up Sunday, continuing construction of Shin Kori 5 and 6, instead of shutting down the projects, was considered more convincing.

Doctor Lim Chae-young of the Korea Atomic Energy Research Institute made a presentation to argue for continuing the construction and said, “Fear cannot conquer science.” But Researcher Lee Yu-jin of the Energy and Climate Policy Institute, who argued for permanent suspension, used political slogans such as “nuclear energy is the energy of destruction,” and failed to win support.

An independent committee aimed at collecting public opinion on the fate of Shin Kori 5 and 6 will make a final recommendation on Friday, based on the public panel’s discussion.

The committee must not try to please the government. It must handle the issue based on the vote of the panel. It is time for the country to awake from the nightmare of the 100-day suspension of the construction of the two nuclear reactors.