KHNP head says tech is the key to safety

KHNP head says tech is the key to safety 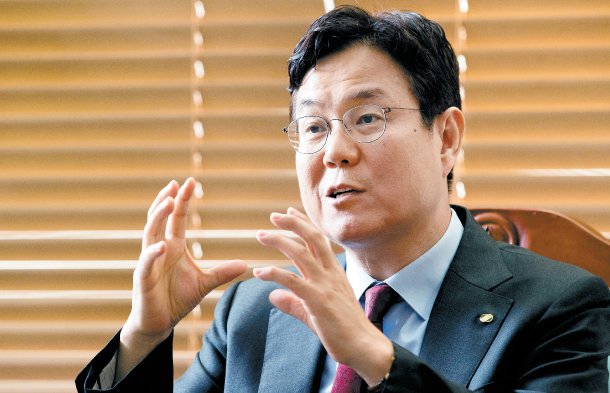 Lee Kwan-sup, president and CEO of Korea Hydro and Nuclear Power and also the president of the World Association of Nuclear Operators (WANO), talks about the WANO general meeting and the energy policy of the current government during an interview with the JoongAng Ilbo on Friday at an office in Seoul. [JANG JIN-YOUNG]

Operators and employees of 122 nuclear power plants in 34 different countries have gathered this week in Gyeongju, North Gyeongsang for the general meeting of the World Association of Nuclear Operators (WANO), an international body created in 1989 by nuclear operators around the world. The general meeting is a biennial event intended to increase the safety and reliability of nuclear plants worldwide.

The incumbent president of WANO is Lee Kwan-sup, who is also president and CEO of Korea Hydro and Nuclear Power (KHNP), a state-run energy company in Korea. The JoongAng Ilbo sat down with Lee on Friday at a KHNP office in Seoul to discuss WANO and the Moon Jae-in administration’s policy on nuclear power. The following are edited excerpts from the interview.

Q. The general meeting of WANO is taking place in Gyeongju, North Gyeongsang. What is the World Association of Nuclear Operators?

A. The incident at Three Mile Island in the late 1970s left U.S. nuclear operators in shock. It was apparent that an accident could hurt the entire industry. So the U.S. operators gathered to create an institution to impose a certain level of safety standard on all plants. WANO is the global version of that organization. The impetus behind the expansion of the institution to a global level was the Chernobyl meltdown in 1986. Now, nuclear operators from around the world are trying to increase the level of safety.

What do you think about the criticism that the government and KHNP are not promoting WANO enough?

It’s because of the nature of the WANO general meeting. The meeting is largely about coming up with self-regulatory policies among operators to ensure the safety of the plants. It is not a place to advertise or promote the nuclear industry. The meetings are a place to discuss the fields of improvement for the development of nuclear plants, or how to resolve [certain] issues.

KHNP suggested during the meeting that the fourth industrial revolution will lead to technology that can be adopted for nuclear safety. Why did it make such a recommendation?

Our intention is to utilize the core technologies of the fourth industrial revolution such as Internet of Things, big data and artificial intelligence to raise the level of safety at nuclear plants. A nuclear plant has many different variables [that must be monitored] including the temperature, humidity, radiation level and the rpm of turbines. Data [on the variables] is accumulated in real time through various sensors. There are about 1,200 measurable variables and the volume of data is bigger if you consider overlapping parts. In the past, we simply recorded and stored such data but now, [technologies such as] artificial intelligence can quickly analyze and process the level of information that humans cannot handle. So-called intelligent power plants are made possible.

What do you think about the rising concern among the public about the safety of nuclear plants due to incidents such as the earthquake in Gyeongju?

The most important factor of the nuclear plant business is public acceptance. It’s useless to bolster the safety infrastructure of the plant after accidents such as the Fukushima meltdown have taken place already. In this regard, ensuring safety should not stop at just developing related technologies but [operators] must help the public become aware and be assured. Political factors cannot help but play an important role in a nuclear plant project, as can be witnessed in the Shin Kori 5 and 6 reactors.

Other countries are no different. We will talk about the importance of public acceptance at the WANO meeting.

Is the government contradicting itself by trying to export reactors while trying to phase out nuclear energy, as some people point out?

It is a fact that it’s impossible to build plants in Korea as fast and large as before. Just because the government is trying to phase out nuclear energy does not mean the operation of plants will be suspended immediately. We must operate the plants for the next 60 years. Above all else, energy policies may change in the future in accordance with the changes in the cost of fuel, [affected by variables] such as high oil prices. Countries that buy Korean reactors understand this situation. In the future, we will aggressively promote the fact that Korean reactors are safe.

A suggestion on what the government should do with the Shin Kori 5 and 6 will be announced on Oct. 20. How do you evaluate the process [of surveying public opinion on the construction of the reactors]?

It is meaningful that the public took an interest in the government’s energy policy. It was made possible for the public to discuss the pros and cons of nuclear and renewable energies through the process. I also think the committee tried hard to be as fair as possible. But the three-month period and fact-checking on the information may have been insufficient.

What will happen if the government decides to suspend the construction based on the suggestion?

There is no precedent for suspending a plant under construction. It becomes a very difficult situation for the operator. There is no clear legal basis to the permanent suspension of the construction and the amount of compensation to the local residents and construction companies will be considerable.

KHNP cannot deal with such problems on its own without the government and the National Assembly stepping in to tidy things up. The Ministry of Trade, Industry and Energy also said on Nov. 12 that it will make the necessary changes to related laws when the construction is suspended. We will take follow-up measures in the future through cooperation with the government.

What direction do you think the government policy on nuclear energy should head in?

It’s appropriate that renewable energy should be the future of energy. But we must also consider the current conditions.

Korea has many disadvantages, including the size of the country, that makes it difficult to have renewable energy production facilities. We have to have various energy sources at our disposal. Renewable energies currently take up about 4 percent of Korea’s energy consumption.

Considering that 60 percent [of the available renewable energy] is biomass, other types of renewable energy that we generally talk about such as solar and wind energy take up less than 1 percent. Even that [1 percent] is the result of pouring in tens of trillions of won in the past 10 years, during the Lee Myung-bak and Park Geun-hye administrations. Can we then be confident in our ability to generate more than 20 percent of the energy we use from just renewable energies alone by 2030?

The plan for electricity supply and demand is made every two years and the government will make the eighth version of the plan this year.

We must look at increasing the portion of renewable energy over the next two years with the plan to phase out the nuclear reactors. We can then come up with a revised plan that uses different sources of energy, including nuclear and renewable energy, in 2019.