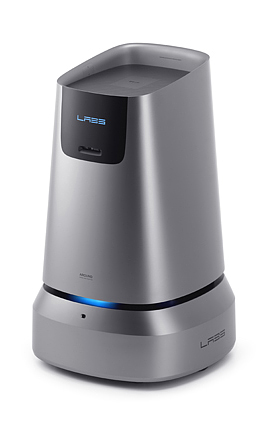 At its annual IT technology conference, DEVIEW, Naver announced Monday that it would extend its service outside the search engine platform through an “ambient intelligence initiative,” which refers to an environment where electronic devices react sensitively to people’s needs and provide desired products or services.

“Naver is doing research on technology that can enhance people’s lives by understand their environments and possibility,” said Song Chang-hyun, chief technology officer at Naver during the conference.

The IT giant unveiled nine types of robots at the IT event, most of which have been solely developed by Naver. It showcased a self-driving robot named Around, which is developed to move around indoors and is equipped with 360-degree cameras and three-dimensional razor scanners so it can map its environment and detect obstacles lying ahead.

Naver also unveiled Aircart, an electronic cart equipped with physical human-robot interaction so that users can easily control the cart’s movement through the sensors attached on the handle. Around and Aircart will be test run at the Yes24 bookstore in Busan. The date of their official public launch has not been decided.

In collaboration with Korea Tech, Naver also unveiled a robotic arm called Ambidex, which is lighter than a human arm, unlike most robotic arms being currently used.

“[Ambidex, which has] similar joint structure as a human arm, will be able to do meticulous jobs such as cooking, cleaning, serving and nursing,” the company said in a statement.

Naver is also offering something new in the internet realm, the company’s specialty. In its attempt to enhance the internet-user experience, Naver launched its first-ever internet platform, Whale, a service Naver has been developing for the past five years.

Whale enables the user to divide the browser screen so that two pages can be simultaneously shown on a single page. The browser is also, of course, intimately linked to Naver’s existing services such as its translation program, Papago, and search engine, Naver.

Whale officially launched on Monday for Windows and Apple computers, and its smartphone version is slated to launch in December.

Naver is also getting into the automotive industry. On the back of obtaining the Transport Ministry’s approval to test run self-driving vehicles on road for the first time as an IT company, Naver said it will reach Level 4 in autonomous driving by the end of this year, a level whereby a car drives itself even when a driver is not there to intervene. The IT company is currently collaborating with Korea Advanced Institute of Science & Technology to work on technology that can extract data from signboards precisely and rapidly, even in metropolitan areas.