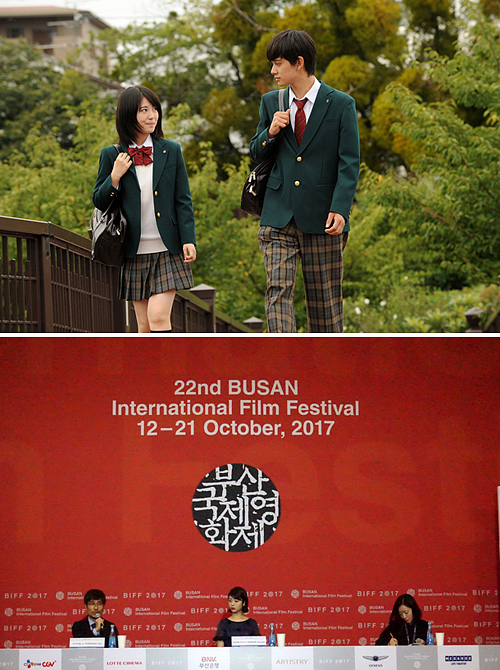 Top: “Let Me Eat Your Pancreas” is a Japanese movie that centers on a blossoming relationship between a friendless high school boy and the most popular girl in his class. Bottom: Sho Tsukikawa, director of the teen romance film “Let Me Eat Your Pancreas,” far left, and Minami Hamabe, middle, talk about the film during a press conference on Sunday. [NEXT ENTERTAINMENT WORLD, JIN MIN-JI]

BUSAN - At first glance, “Let Me Eat Your Pancreas” reads like the title of a horror movie.

To the contrary, the Japanese flick turns out to be a romantic drama revolving around two high school students with completely opposite personalities.

Adapted from Yoru Sumino’s bestselling novel, the heartwarming coming-of-age movie is set to hit Korean theaters later this month. Before it becomes available nationwide, the film made its Korean premiere at the ongoing 22nd Busan International Film Festival (BIFF) which runs through Saturday.

Ahead of the film’s screening at the annual movie event, its director Sho Tsukikawa and main female star Minami Hamabe met with local press in Busan on Sunday.

“Though the title may sound a little horrible, it is a very touching story,” the director, who is behind romance movies “The 100th Love with You” (2017) and “The Black Devil and the White Prince” (2016), told reporters during the press conference.

“After reading the script, I was very shocked because it reminded me of the equal value each day has for everyone. This is something people often forget about because they take that fact for granted,” the filmmaker said while explaining what drew him to the film.

The movie centers on a blossoming relationship between a high school boy named Haruki, who has no interest in befriending anyone, and Sakura, the most popular girl in his class.

Though they have opposite personalities, the two happen to become very close when the loner Haruki accidentally discovers Sakura’s secret diary that reveals she is suffering from pancreatic cancer, something she has been keeping from her friends.

Sharing the secret, they become closer and begin to admire each other for what they lack. For Haruki, its Sakura’s social skills that appeal to him. Sakura finds Haruki’s independence attractive.

There is nothing new about a romance story revolving around an ill lover facing death. Audiences have seen similar stories in Japanese romance films like “I Give My First Love to You” (2010) and “My Rainy Days” (2011).

But “Pancreas” diverges from the typical storyline, according to the filmmaker, by highlighting the impact that the ill girl has left on the lives of those who were close to her instead of focusing on the sorrow following her death. In fact, that is how the director tried to differentiate the film from the novel.

“The original novel only depicts the characters’ days in high school. But the film tells the story from the perspectives of the characters when they have grown to become adults. By unfolding the story retrospectively, the movie jumps back and forth from the past to the present, allowing viewers to greater understand the entire context of the story,” the director said.

In the novel, Sakura is depicted as a very bright character. That brightness is visualized in the film through the character’s repeated smiles, which the actress described as challenging to pull off.

“[After reading the script], I thought that Sakura is a girl with a beautiful smile despite the personal tragedy she is suffering. Though she is sick, I tried to play the character as someone who can smile sincerely from the bottom of her heart.”

The film, which topped Japan’s box office upon its debut in July and is one of the most talked-about films on BIFF’s lineup, has been successful due to the strong impact of the title, according to the actress.

“The meaning of ‘Let Me Eat Your Pancreas’ becomes completely different and feels much more touching before and after the audience watches the film. I believe the expression really warms people’s hearts.”

The director believes the secret success behind “Pancreas” is the positive message the film delivers despite the gloomy circumstances.

“I believe the movie is being well-received because it delivers a positive message that reminds viewers the importance of cherishing their life while they have it.”

The 115-minute film is slated to officially open in Korean theaters on Oct. 25. The movie, co-starring Takumi Kitamura, Kitagawa Keiko and Shun Oguri, is rated 12 and above.