‘The Outlaws’ wrestles its way past ‘The Fortress’

‘The Outlaws’ wrestles its way past ‘The Fortress’ 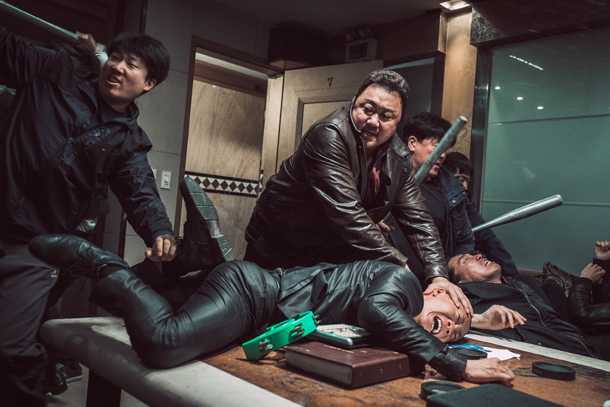 “The Outlaws” ruled Korea’s weekend box office in its second weekend, pushing down “The Fortress.” [MEGABOX PLUS M]

The performance of two local releases flip-flopped in their second weekend at the box office. While the crime movie “The Outlaws” shot to the first spot, the period epic “The Fortress” slipped down to land at second.

“The Outlaws,” starring Ma Dong-seok and Yoon Kye-sang, dominated Korea’s weekend box office by selling 952,000 tickets at 1,127 screens from Friday to Sunday, according to the Korean Film Council Monday.

The movie, which is about a merciless boss (Yoon) from a Korean-Chinese crime organization headquartered in Harbin, northeast China, who is willing to commit any crime for money, and a local police detective (Ma) who tries to catch the ruthless criminal, accounted for an impressive 50.7 percent of the entire weekend’s ticket sales.

Total ticket sales for “The Outlaws” have reached 3.67 million, narrowly surpassing last weekend’s winner “The Fortress,” which has sold a total of 3.62 million tickets. Both movies were released on Oct. 3.

Based on Jang Hoon’s best-selling novel, the CJ E&M release takes place in 1636, during the Joseon Dynasty (1392-1910), when China’s Qing Dynasty invaded Korea. The Korean court flees the capital to take shelter at the Namhan Fortress, in Gwangju, Gyeonggi, which is quickly surrounded by the Qing army, eventually forcing King Injo to surrender.

Coming in at third was “RV: Resurrected Victims.” The mystery thriller, starring Kim Hae-sook and Kim Rae-won debuted with 190,000 tickets sold, bringing its total to 242,000 admissions sold since it was released on Thursday.

The film follows the story of a mother who is stabbed to death after being chased by a robber looking to steal her money, and her prosecutor son, who she sacrificed everything for. Things start picking up when the mother returns seven years after her death and surprisingly attacks her son.

Despite the positive reviews from critics and audience, the Denis Villeneuve-directed sci-fi “Blade Runner 2049,” the second installment of the Ridley Scott’s visionary 1982 dystopian noir, only managed to come at fourth in its first weekend. “Kingsman: The Golden Circle,” starring Colin Firth and Taron Egerton, rounded out the top five.