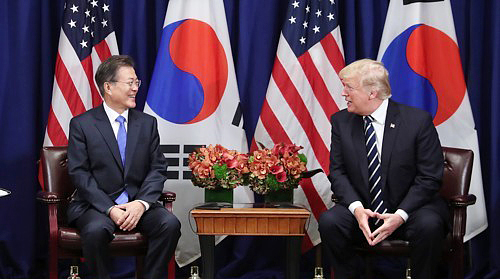 The U.S. president will arrive here on Nov. 7, becoming the first foreign leader to visit South Korea since Moon took office in May, according to Cheong Wa Dae.

Trump will also be the first U.S. president to make a state visit to South Korea in 25 years, it added.

"At their upcoming summit, the two leaders are scheduled to discuss ways to strengthen the Korea-U.S. alliance, enhance their cooperation to resolve the North Korean nuclear issue, establish peace and stability in Northeast Asia and enhance their countries' practical cooperation."

Earlier, the White House said the U.S. president will also offer a speech at the South Korean National parliament during his visit here.

"The president will speak at the National Assembly, where he will celebrate the enduring alliance and friendship between the United States and the Republic of Korea, and call on the international community to join together in maximizing pressure on North Korea," the White House said in a released statement.

The Moon-Trump meeting will mark the second of its kind since Pyongyang staged its latest and sixth nuclear test on Sept. 3.

The two met last month on the sidelines of the United Nations General Assembly in New York where they underscored the need to put additional pressure on the communist North so the country will have no choice but to come to the dialogue table on ending its nuclear ambition.

North Korea has refrained from making any provocations since its last missile launch on Sept. 15, but many believe the country may be poised to stage an additional missile test in the near future. Pyongyang continues to remain silent over Seoul's proposal to resume inter-Korean dialogue.

Trump's trip to South Korea will follow his visit to Japan that will begin Nov. 5, according to the White House. He will leave Seoul for Beijing on Nov. 8 for a "series of bilateral, commercial and cultural events, including meetings with his Chinese counterpart Xi Jinping," it said.

Trump's visit to Seoul will be part of his 12-day Asia trip that will first take him to Hawaii and then later to Da Nang, Vietnam, for the annual Asia-Pacific Economic Cooperation summit that will also involve the South Korean president.

Moon is scheduled to arrive in the Vietnamese city on Nov. 10 following a three-day visit to Jakarta, Indonesia, the presidential office Cheong Wa Dae said earlier.

Both Moon and Trump will arrive in Manila on Nov. 12 for the East Asian Summit and meetings with the Association of Southeast Asian Nations (ASEAN).