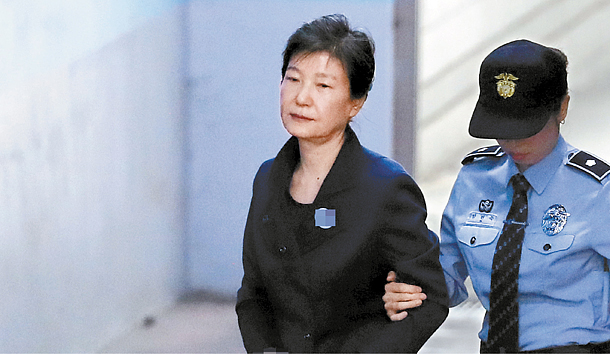 Former President Park Geun-hye is escorted to the Seoul Central District Court in southern Seoul on Monday, where she made a critical statement about her detention being extended. [YONHAP]

Former President Park Geun-hye challenged Monday the integrity and fairness of the court in her bribery trial, claiming she was the victim of “political retaliation,” while all of her lawyers resigned from the case to protest the judges’ decision to extend her detention.

The Seoul Central District Court held a hearing Monday, the first since it issued an additional warrant to the prosecution to grant its request to extend Park’s detention until next April. The ousted leader, who was taken into custody in March, made the unusual move Monday of reading a statement at the beginning of the hearing. It was the first time Park addressed the court since her trial began in May.

“The prosecution investigated the scandal for six months and the court spent another six months for the trial,” Park said, pointing out that Monday was supposed to be the end of her detention. “I cannot accept the decision that I should be investigated further under detention.”

Park said she and her lawyers all felt hopeless.

“I came to the conclusion that it is no longer meaningful to have faith in the court that it will conduct a trial based on the Constitution and with a conscience despite outside political pressures and public opinion,” Park said. “I will let the judges decide the future of my trial. I may have to go through a harsher and more difficult process, but I won’t give up. There are still people who support and trust me, and I believe the truth will be laid bare one day.”

She also made some emotional remarks arguing her innocence - and blaming her longtime friend and alleged co-conspirator Choi Soon-sil for the scandal that lost her the presidency. “My trust for one person returned to me as unimaginable betrayal,” Park said. “I have lost all my honor and reasons for living.”

Park, Korea’s first democratically-elected leader to be removed from office, is standing trial for bribery. Although she did not receive money directly, prosecutors concluded that she received bribes from conglomerates in collusion with Choi. The total amount of bribes cited in her April indictment was 59.2 billion won ($52.04 million).

“I should be the last victim of political retaliation in the name of the rule of law,” Park said. “I will take the historical responsibility for this scandal. I should be held accountable for everything and I ask the court to show leniency to the public servants and businessmen indicted because of me.”

Following her statement, Park’s lawyers asked for a recess and the court allowed it. As Park exited the courtroom, some of her supporters in the spectators’ section shouted, “We love you!”

When the hearing resumed, one of Park’s seven lawyers, Yoo Yeong-ha, announced that the defense team was resigning because of the judges’ bias.

He said the Constitution and Criminal Procedure Act stipulate the presumption of innocence and the principle of operating a trial without physical detention, and they were ignored during Park’s trial. “As we witness the grand principles vanishing in front of our eyes, we found no reason to be involved in this trial any further,” Yoo said. “Because any defense arguments are meaningless, we will all resign.”

“The lawyers are leaving the accused alone in this filthy and bloodthirsty courtroom,” Yoo said. “Some may criticize us for playing a dirty trick, but we will take the criticism.”

As Yoo made that remark, some spectators started wailing loudly.

The three presiding judges, including senior judge Kim Se-yun, listened to the statements with solemn faces. Before Park and Yoo made their statements, Kim said the new warrant was issued without bias and it did not mean the court is leaning toward a guilty verdict.

“Park needs to name a new lawyer or accept the court-appointed lawyer for the trial. Then, the new defense lawyer will have to review more than 100,000 pages of documents and trial records,” Kim said. “The accused will suffer [as a result], so the defense lawyers must seriously consider whether they will actually resign or not.”

Prosecutors said that Park’s argument against the new detention warrant was unreasonable. They regretted her lawyers’ leaving the case.

The court said hearings would resume on Thursday regardless of whether Park hires a new lawyer.

Under the law governing criminal litigation, a suspect who is undergoing a trial under physical detention or anyone accused of a charge punishable by more than three years in prison is required to have legal representation.

If no lawyer takes the case, the court will assign one. If Park does not name a new lawyer by Thursday, a court-appointed lawyer will represent her.

If Park gets new legal representation, a significant delay is expected as the case involves massive amounts of records and witness testimony.

Park can also refuse to attend a hearing. The trial can proceed in her absence, but it would be difficult for the court to hear closing arguments and issue a verdict without her presence taking into account the gravity of the case.

After Park claimed she is a victim of political retaliation, the Blue House gave no official response. “It is inappropriate for us to comment on an ongoing trial,” a senior presidential official told the JoongAng Ilbo. “Park appears to want to spin the case as political retaliation, but responding to her claim will only fuel an unnecessary controversy.”

“She probably forgot when the people impeached her and sent her to the court,” he said. “The people will never accept her argument.”

Another presidential official said Park’s statement that she has no faith in the court will backfire. “She didn’t respect the law, and that was why the people impeached her,” he told the JoongAng Ilbo.

The ruling and opposition parties were split over Park’s claims.

“She just disappoints and enrages the people,” said Rep. Park Wan-joo, chief spokesman of the Democratic Party. “She has no intention to apologize to the people. All she has are excuses and incitement.”

The conservative main opposition Liberty Korea Party, of which Park is still a member, said the party also worries that the judiciary has become politicized.