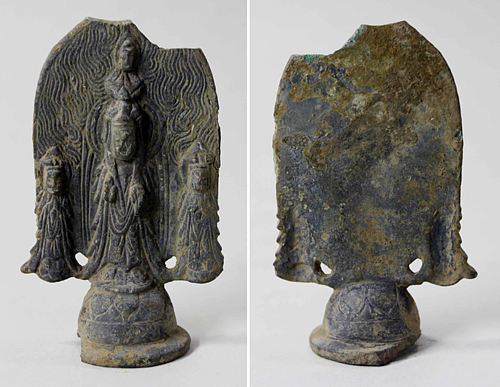 The recently unearthed standing gilt-bronze Buddha triad of the Three Kingdoms Period in Yangyang’s Jinjeon Temple was preserved in good condition, according to the Cultural Heritage Administration, clearly showing the facial expressions as well as patterns on the garments, and is as valuable as a national treasure. [CULTURAL HERITAGE ADMINISTRATION]

A standing gilt-bronze Buddha triad that is believed to be of the Three Kingdoms Period (57 B.C.-A.D. 668) was excavated around Jinjeon Temple’s Three-story Stone Pagoda in Yangyang, Gangwon, according to the Cultural Heritage Administration on Monday.

The Buddha triad, which is presumed to have been made in the 6th century, is 8.7 centimeters (3.4 inches) tall. It features the bodhisattva known as Avalokitesvara in the center, with two Hyupsi bodhisattvas on his left and right. The light from his head and body is engraved in relief.

The administration said that although it is small, it is as valuable as a national treasure because of the exact excavation location. Moreover, there are few Buddha triads from the Three Kingdoms Period that are so well preserved, clearly showing the facial expressions as well as patterns on the garments.

At first, the Buddha triad looked like it was made of bronze, said Do Eui-cheol, the researcher for this excavation, but a basic inspection at the Chuncheon National Museum revealed it to be made of gilt bronze.

Yangyang County and the Kukgang Archeological Institute have been conducting excavations of the ruins around the Jinjeon Temple’s pagoda, which was designated National Treasure No. 122 in July as part of efforts to investigate the characteristics of the temple. The Buddha triad was found in the northern corner of the pagoda.