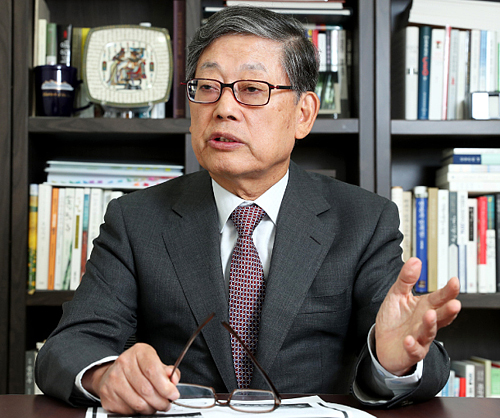 Gone is the time when one could “live by graduating from a good college and get a good job,” said former Prime Minister Kim Hwang-sik, who believes Korea can follow the German example of adapting to the digital era.

Kim himself has spent much of his life adapting. The 69-year-old chairman of the Alumninetzwerk Deutschland Korea (ADeKo), also known as the Alumni Network Germany-Korea, has gone through four careers and 15 employers.

The JoongAng Ilbo sat down with him on Friday at his office in Naesu-dong, Jongno District, central Seoul, ahead of the three-day 9th Joint Korean-German Conference, which kicked off Monday at the Kimdaejung Convention Center in Gwangju.

“We need to create an education process and system that satisfies the demands of the digital era, like Germany has,” he said. “Germany is similar to Korea not only because of its history of division but for overcoming a shortage of resources through technical skills.”

Kim noted that German automakers are paving the way to an era of electric vehicles. Volkswagen said last month it plans to invest more than 20 billion euros ($24 billion) in zero-emission vehicles by 2030. Mercedes-Benz also recently announced it will invest $1 billion to make electric vehicles in the United States and said that up to 25 percent of its cars may soon be fully electric.

“Environmentally friendly cars are trending globally and this tide cannot be reversed,” said Kim. “The government has to take more proactive measures for expanding the infrastructure for electric vehicles, including charging stations and subsidies for driving EVs, to encourage companies.”

He added, “For the growth of the EV market, there needs to be plenty of electricity, so we need to take into consideration policies and budget allocation to make this possible,” saying that the government’s nuclear-free policy “may be right in the long-term, but may cause problems in energy supply.”

Kim said Germany also flip-flopped on its nuclear energy policy before it decided to shut down its nuclear reactors by 2022. “They are far more advanced in renewable energy technologies than we are, so there will be fewer side effects,” he said.

“We need to take into consideration the level of our renewable energy technologies and ability to produce energy when we go forward with a nuclear-free plan.”

Regarding the Moon Jae-in administration’s labor policy, he said, “While it is important to protect the interests of laborers in the short-term, the budget has to be allocated appropriately to education opportunities where new technologies can be learned in order to adapt in the digital era.” He pointed to the idiom: “Give a man a fish and you feed him for a day. Teach a man to fish and you feed him for a lifetime.”

Kim also was critical of the Korean education system, which he believes focuses too much on college enrollment.

“We are in an era where elementary students should be learning computer programming,” he said, “but we are constrained in an education that centers around private academies to prepare for university enrollment.”

In Germany, he said, the university enrollment rate was only 40 percent, although college tuition was free ? instead, students “focused on vocational education to find a job best suited for them.”

The conference, with the theme “Engineering for our Future,” is expected to draw some 500 attendees from German and Korean government agencies and companies, including the Federal Institute for Vocational Education and Training (BIBB), German Academic Exchange Service (DAAD), Korea Institute of Science and Technology Evaluation and Planning (Kistep), Hyundai Motor and Siemens.

Keynote speakers include Friedrich Hubert Esser, professor at Germany’s BIBB, who will speak about Industry 4.0 and digitization, and Hyundai Motor Vice Chairman Kwon Moon-sik, who will speak on the future technology of the automobile industry.

In its sessions today, the conference will tackle topics including sustainable energy and e-mobility, robotics and automation, healthcare and medical technology and smart metropolitan planning.

The ADeKo alumni network was founded in 2006 with the support of the German Federal Ministry for Education and Research.