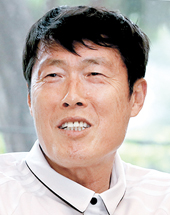 Cha Bum-kun, former head coach of the Korean national football team, has been named the sports hero for 2017 and will be inducted into Korea’s Sports Hall of Fame, the Korean Sport & Olympic Committee (KSOC) said on Monday.

Cha became the first football player to be selected as KSOC’s sports hero, since it first started giving out the award in 2011 to honor those who promoted Korea internationally through their athletic achievement. From 1978 to 1989, Cha played for Bundesliga, the German football league, and scored a total of 98 goals in 308 matches. Cha held the record for the most number of goals scored by a foreign player in Bundesliga before Stephane Chapuisat of Switzerland surpassed him with 106 goals in 1999.

But when it comes to the Korean national football team, Cha still holds the record for the most number of matches played, 136, and goals scored, 59. Once retired, Cha continued his football career as head coach of the national team and two K league Clubs, Ulsan Hyundai FC and Suwon Samsung Bluewings. He also opened a football academy named after himself to develop young Korean talents.