In yet another demoralizing development for the Korean men’s football team, the country fell outside the top 60 in FIFA’s October ranking unveiled Monday, raising concern that the team might not be ready to face the world’s top football nations at next year’s World Cup. 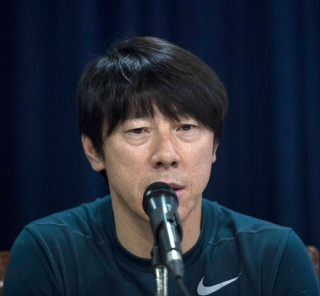 Shin Tae-yong, head coach of the Korean men’s football team, speaks at a press conference in Seoul on Sunday. [YONHAP]

The drop in ranking by 11 spots to 62nd was the result of losses in two friendly matches, against Russia and Morocco, in September. FIFA expects to use the October ranking to assign berths in the World Cup, and Korea will likely be given the worst spot.

While 62nd is not their worst performance - that distinction goes to the November 2014 team, which ranked 69th - it is still an embarrassment because Korea ranked lower than China, which failed to advance to the World Cup. Since the FIFA ranking system was first introduced in 1993, Korea has never ranked below China, a historically poor-performing team.

Of the 23 countries that have finalized their place in the World Cup, Korea is ranked the third lowest, above host country Russia at 65th and Saudi Arabia at 63rd.

FIFA recently announced it would use the ranking to assign berths for next year’s World Cup, putting lower-ranked teams at a significant disadvantage. Up until the 2014 World Cup, teams were assigned in second, third and fourth groups according to their continental confederations.

Korea benefitted from this system during the 2010 World Cup, when it was assigned with Greece, Argentina and Nigeria. Korea was able to advance to the round of 16 by defeating Greece 1-0.

Few expected Korea to make such a significant fall. Coach Shin Tae-yong has only been at the helm for three months, but his position is already in jeopardy.

“I don’t feel comfortable with showing such disappointing results to football fans,” Shin said Sunday during a press conference at the headquarters of the Korea Football Association. “Starting in November, I’ll stack the team with players that can compete at the World Cup, and we’ll build up the basics so we can win.”

Shin requested the Korea Football Association find two higher-ranked teams to compete against in A-level friendlies in November and March, hoping the matches can help hone his management capabilities and improve the team’s dynamic. Defense remains one of their biggest weaknesses.

The Korea Football Association is in the process of solidifying a date for a friendly next month, but finding a team will be difficult. Countries going to the World Cup have already finalized their friendly matches, and Korea’s drop in FIFA ranking will make it even harder to find an opponent.

In the meantime, the team’s biggest challenge is expected to be the East Asian Cup in Japan next month, which Shin considers a must-win. “We’ll be preparing to bring results.”