A left out feeling

A left out feeling 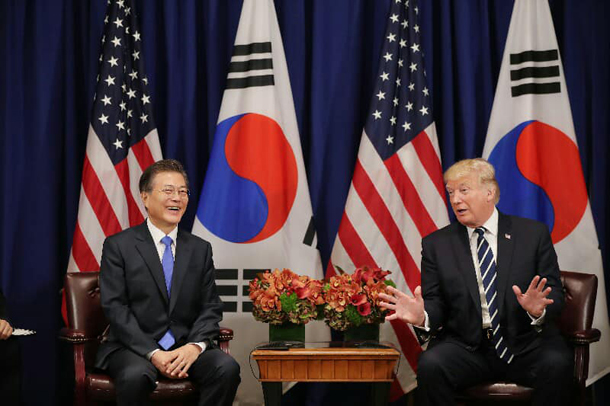 As U.S. President Donald Trump flew to Las Vegas in the aftermath of the mass shooting on Oct. 4, he received a call from Japanese Prime Minister Shinzo Abe. After accepting his condolences, Trump moved onto the North Korean nuclear issue. He said, “Shinzo, what should I do?”

A source in Washington who claimed to have read the transcript of the 12-minute call said he was surprised by two things. The first was Trump’s reliance on Abe. As Abe said that talking with North Korea wouldn’t work and stressed pressure, Trump repeatedly said that he agreed with him. The other was Trump’s distrust of President Moon Jae-in. I haven’t read the transcript personally, but the source claimed to have been astonished by the harsh language Trump used. As Trump was furious, Abe said that he would deliver a message to Moon.

U.S. Secretary of State Rex Tillerson advocates talks, but Trump told him not to waste time. Then Trump said we were experiencing a “calm before the storm” without clarifying the cryptic remark.

It sounds like a good-cop-bad-cop game, but those familiar with the White House disagree. They claim the situation honestly reflects Trump’s attitude at the moment. And Abe plays a key role in Trump’s perspective. America First may be the underlying philosophy for economic issues, but in terms of North Korea policy, it may be Japan First. Abe has been derided as Trump’s poodle, but the reality may be quite another thing. He may have become Trump’s partner — or his trainer.

In November, Trump is coming to Asia. He is staying three nights in Japan while spending one in Korea. While the schedule has yet to be finalized, the itinerary shows how Trump feels toward Abe. He is to play golf and meet families of Japanese abducted to North Korea. There could be more surprises.

The key is whether Abe’s ideas coincide with Korea’s. No matter how cunning he may be, if Abe leads Trump in a direction that we favor, there’s nothing bad about it.

But that might be too much to hope for. Abe opposes talks with Pyongyang without the precondition of denuclearization. He is extremely wary that the United States may condone Kim Jong-un’s regime and accept a minimal nuclear arsenal in exchange for North Korea’s abandonment of of its ICBM program. He prefers military action to this option. That’s why he is interfering in Korea’s pursuit of dialogue and coming between the United States and Korea. If that’s truly in the national interest of Japan, we can’t do much about it. But we can at least try persuasion.

Writer Han Kang wrote “While the U.S. Talks of War, South Korea Shudders” for the New York Times, but I shuddered more after reading Nicholas Kristof’’s “Why I Went to North Korea” on the same day. He finished the column, “I leave North Korea with the same sense of foreboding that I felt after leaving Saddam’s Iraq in 2002. War is preventable, but I’m not sure it will be prevented.”

China has the power to negotiate with Trump on equal terms. It has nuclear weapons. Japan has Trump’s trust, and can make sure the United States won’t plan anything behind its back. What does Korea have to do to prevent a war on the Korean Peninsula?

This is no time to take Trump on a tour of the DMZ, a cliché scene. We need a critical change to bring Trump onto Korea’s side. This may be our last chance.

*The author is a Washington bureau chief of the JoongAng Ilbo.