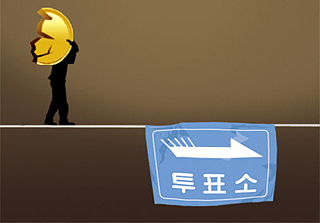 I was enjoying a late lunch at one of my favorite restaurants in the outskirts of Chuncheon, Gangwon, during the long holiday week when I heard the shop owner bang the phone down, shouting, “Do as you please!” She ranted that an employee that she had sacked a few days prior for poor work behavior had reported her for illegal dismissal. She would have to pay the employee a month’s pay because she had not clarified the temporary employment period in the contract.

There will probably be a lot more unpleasant scenes at mom-and-pop stores like hers. Starting next year, minimum wage will go up by nearly 17 percent. To keep three employees on the payroll, a shop owner would have to pay an extra 1 million won ($885) a month or 10 million won a year in labor costs. The employer’s share in the employee’s legal insurance policies will also go up. Employees prefer not to report their employment status in order to save on monthly insurance fees. The employer will have to pay that much in taxes because actual labor costs are not counted as operation expenses.
I asked, “Won’t the government subsidy help?”

The government has promised to subsidize merchants and small businesses once the wage floor goes up by double digits next year. “Humbug,” she snorted. “How much would that help? We just have to tighten up, I guess,” she sighed.

More small-scale restaurant owners are doing the work themselves in order to save on labor costs. As result, temp placements have decreased. In the famous dining district of Chuncheon, six restaurants have already been replaced in the last year. In the place of diners, convenience stores have boomed. They sell beer outside and serve ready-to-eat meals. Convenience stores, which do not need more than one employee, have been rapidly replacing restaurants.

Owners of convenience stores in Seocho District, southern Seoul, usually cover their stores after midnight. They can only afford daytime employees. In areas where business is not so good, some shop owner couples have to take turns watching their shops for 18 hours and hire a temp for the other six hours. They cannot afford the weekend work pay. Under the labor law, the employer has to pay one full day’s pay to an employee who works 15 hours or more a week.

Six hours worth of work in a seven day period requires a full day’s compensation per month, or 156,000 won extra. That will also go up next year. About 7 million registered self-employed businesses and 3 million small and mid-sized employers fall under the new pay regulation. A restaurant owner with three employees will have to pay an extra 15 million won a year. One convenience store owner I know said he would have to close his business within the next five years. Thousands would likely end up making the same choice.

The government, in announcing the plan to hike minimum wage by double digits next year, vowed to spend 3 trillion won to subsidize employers in the spike of labor costs and also ease their financial burden by lowering the value-added tax rate, credit card service fees, medical coverage costs, and social insurance fees as well as throwing in support in material purchases and tax deductions. But self-employed businesses know public funds are never on time or enough. Instead of trying to meet all the requirements for subsidies and incentives, they would be better doing the work themselves and hiring fewer outside work.

According to the endowment effect theory, coined by this year’s Nobel laureate in economics, Richard Thaler, humans tend to be loss-averse. Once a person owns an item, forgoing it feels like a loss. Employers’ aversion to extra labor costs would dash government hopes to stimulate growth through increases in income and wages. Temps would be happy about a fatter paycheck. But the policy deals a blow to the 10 million self-employed businesses and small and mid-sized enterprises. The transition would have been less harmful if the government had endeavored to improve the environment to promote better business and revenue first.

Governments tend to justify public policies specifically based on a certain theory. The justification is often bent to meet the economic and psychological goals of the theorist. Thaler, a pioneer in behavioral economics, also champions the “nudge theory” in public policy-making, proposing positive reinforcement to achieve non-forced compliance and changes. Nudges must not be mandates. Making roads narrower in accident-frequent areas will encourage drivers to slow down more than warning signs will do. President Moon Jae-in’s early-stage policy to push up wages for low-income earners was arm-twisting and not nudging. As result, employers are screaming. The policy will make the middle-class fall to the working-class.

A policy to improve income and hiring opportunities for those with low incomes is motivated by a noble cause. The trouble is that the government takes the credit, and the middle class pays the price. People are skeptical of the pay-now-and-compensate-later plan. The streets are getting noisy with tensions among shopkeepers and arguments between owners and employees. Over 10 million self-employed and small merchants are suffering. They could get their payback during next year’s local elections.

*The author, a professor of sociology at Seoul National University, is a columnist for the JoongAng Ilbo.