More Koreans in their 20s filing for bankruptcy

More Koreans in their 20s filing for bankruptcy 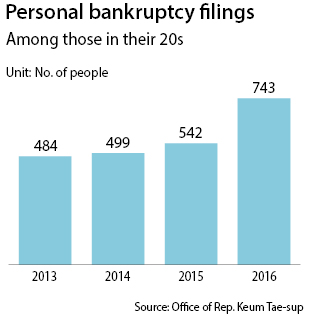 In yet another sign of an aggravating job market for the country’s youth, an increasing number of 20-somethings in Korea are filing for personal bankruptcy, a lawmaker from the ruling party said Tuesday.

The number of people in their 20s who filed for personal bankruptcy rose to 743 last year from 484 in 2013, a 54 percent increase, according to data released by Democratic Party Rep. Keum Tae-sup, who serves on the National Assembly’s judiciary committee.

The age group stood out as the only one that saw an increase in the number of filings over that period, suggesting a slow job market is taking an especially hard toll on Korea’s youth. In the first half of this year alone, 360 people in their 20s have already filed for bankruptcy.

According to Statistics Korea, unemployment among those aged 15 to 29 stood at 9.4 percent in August, the highest figure for that month since 1999, when the rate 10.7 percent of youth were unemployed in the wake of an unprecedented financial crisis.

“An increase in the number of 20-somethings seeking personal bankruptcy is a telling sign of financial struggle,” Rep. Keum said. “They are squeezed by a saturated job market and student loans.”

The lawmaker called on the government to roll out a job creation policy and measures to ease the burden of housing costs for the young.