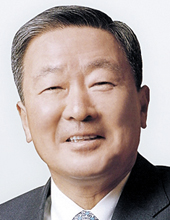 LG Group Chairman Koo Bon-moo on Tuesday donated 100 million won ($88,355) to the family of a soldier who was recently killed in an accident while performing his military duty, the conglomerate said.

Last month, a 22-year-old soldier surnamed Lee was hit in the head by a stray bullet as he walked back to his base in Gangwon Province.

Shortly after the accident, the victim’s father said he did not want the shooter to be punished, adding that he wishes to avoid having the man live under guilt or other pressure.

LG Group said Koo was touched by how the victim’s family took into consideration the various aspects of the tragic accident despite trying to overcome their own loss.