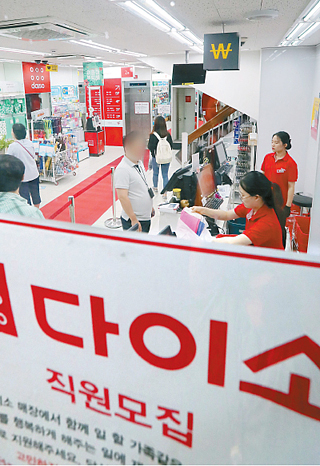 A Daiso store in Seoul on Aug. 15. The franchise and other chains that dominate a specific product sector are under fire for threatening smaller stores. [YONHAP]

Did Daiso kill the stationery store?

Their owners believe so, according to survey results collected by People’s Party lawmaker Lee Chan-yeol and the standing committee for small and mid-sized enterprises. Around 93 percent of 459 stationery stores nationwide said that their sales had dropped after the launch of Daiso, the Korean version of Japan’s 100-yen (89-cent) store franchise.

Almost half of respondents said they were considering whether or not to close their business. Most of them believed that Daiso, which sells toys and stationery at low prices, reduced the number of customers shopping at local stationery stores.

Based on such figures, Lee said that “Daiso has already grown into the size of a ‘retail dinosaur,’ and its aggressive expansion is jeopardizing the livelihood of local store operators. We need to adjust the [legal] definition of major stores to include entire sales and the total number of branches in order to make sure there are no blind areas regarding government regulations.”

In reality, the situation is much more complicated. In fact, the controversy surrounds not only Daiso, which specializes in daily supplies, but other chains that dominate a specific product sector as well. Health and beauty store Olive Young with 900 branches, electronics outlet Lotte Hi-Mart with 460 stores and furniture store Ikea with 2 branches are well known examples.

These chains are among the very few brick-and-mortar retailers today that are actually growing despite the prevalence of e-commerce.

Daiso currently runs 1,200 stores nationwide among which 458 are franchises. Its sales this year are projected to reach almost 2 trillion won ($1.8 billion). The achievement comes two decades after CEO Park Jung-boo established a store in Cheonho-dong, southern Seoul, in 1997. The store’s initial name was Asco Even Plaza, but the company’s name was changed to Daiso A-Sung after it secured investment from Japan’s original 100-yen store operator, Daiso, which now holds a 34 percent stake. The number of stores shot up from 100 in 2001 to 500 in 2009 and over 1,150 last year. Daiso’s annual sales are similar to GS Supermarket, the third biggest player in the local supermarket industry.

Discount chains or branded supermarkets are subject to government regulations on establishing new stores and forced closings twice a month in particular commercial districts. Specialized stores are left out. Democratic Party lawmaker Hong Ihk-pyo submitted a proposal to the national assembly to extend the regulations to include complex malls, but dominant franchise stores like Daiso were not mentioned.

However, it is unclear whether the sales generated by dominant chains have actually taken business away from small and medium-sized stores. While these stores’ revenue has definitely skyrocketed in recent years, data suggests that the increase in customers may actually come from larger department stores and discount chains, rather than SMEs.

Between 2007 and 2017, consumption among Shinhan Card holders moved from department stores and discount chains to high street chains that dominate a specific product sector and convenience stores, according to the card company’s internal trend research center.

Spending at health and beauty stores and Daiso grew to 53.3 billion won this year - an 8,776 percent jump over the last decade. This is the highest growth rate among retailers. The number of shoppers there also surged 62 times during the same period to 1,852,000. Consumption at convenience stores also increased 5,245 percent to 207.9 billion won. On the other hand, spending at discount chains rose by a smaller 48 percent to 415.1 billion won and department stores increased 80 percent to 187.6 billion won. Discount chains actually saw sales decline by 16.9 percent from five years ago when revenue peaked at 499.4 billion won.

In response to the complaints of local stationery shop owners, Daiso says that stationery is only a small part of what they offer. “Among over 30,000 products, around 1,000 to 2,000 are stationery,” explained a company spokesman. “Stationery store chains are in direct competition with local SMEs, are not subject to any regulations and a lot of stationery purchases come from online or discount chains too. To pinpoint Daiso as responsible [for the situation] seems too much.”

Skeptics say regulations won’t solve everything because the rise of dominant chains like health and beauty stores and Daiso reflect a change in purchasing patterns.