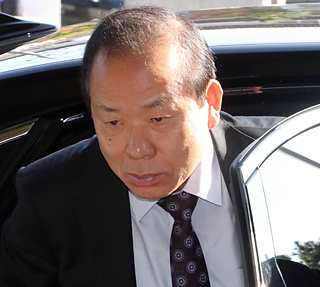 President Moon Jae-in faced a predicament on Tuesday as the Constitutional Court publicly pressured him to name a new chief justice of the court, rejecting his choice for the job, acting chief justice Kim Yi-su.

Since January, the court has been operating with one or two vacancies.

The judges said the vacancy on the bench not only hinders the court’s operations but also damages its prestige as a constitutional institution. “The judges agreed that an appointment must be made as soon as possible to complete the Constitutional Court bench,” the press statement said.

Chief Justice Park Han-chul retired from the post in January during the impeachment trial of President Park Geun-hye. Justice Lee Jung-mi took over as acting chief and completed the trial, but her term ended in March. Lee’s vacancy was quickly filled by the appointment of Lee Seon-ae. In the meantime, Justice Kim became the acting chief of the court, as he served the longest period on the bench among the incumbent judges.

Moon nominated him to formally head the court on May 19. Kim, who joined the court in 2012 at the recommendation of the then-opposition Democratic Party, was the most liberal member of the court.

Moon also made an attempt to fill the remaining vacancy but failed last month. Lee You-jung gave up her nomination after controversy arose over her stock market profits. Then the National Assembly struck down a motion to confirm Moon’s nomination of Kim as the new head of the court. The delayed vote took place on Sept. 11, and the ruling party failed to win crucial votes from the opposition.

The chief justice must be an incumbent judge on the court. He or she must have more than 15 years of experience as a judge, prosecutor or lawyer and must be over 40 years old.

As the Blue House showed no indication of naming a new chief justice, opposition parties boycotted last week a routine audit on the Constitutional Court, challenging the legitimacy of Kim’s service as acting head. The main opposition Liberty Korea Party even demanded Kim resign from the bench.

After 90 minutes of shouting between the ruling and opposition lawmakers, the audit was canceled and no substitute session was scheduled. Moon fueled the controversy by criticizing the opposition parties in a Facebook message.

The Constitutional Court judges’ demand on Monday that Moon name a new chief justice as soon as possible became a new headache for the Blue House. Acting Chief Justice Kim was among the eight judges who made the request.

“Moon decided to respect the court’s decision to continue its operations with the acting chief justice, but they are not reversing their own choice,” a senior presidential aide said. “It is hard to understand.”

When Judge Park Han-chul was appointed in 2011 as chief justice, he said he will only serve until the end of his remaining term. He served as the chief for three years and 10 months and retired.

In 2006, President Roh Moo-hyun made a bold attempt to secure a full six-year tenure for the new chief justice. He made Judge Jeon Hyo-sook, who served on the court’s bench for three years, retire and named her again as chief justice. His attempt, however, failed for a critical legal flaw: she was no longer a sitting Constitutional Court judge, a key prerequisite to serve the post.

Observers said Moon wants to revise the law on tenure first because he wants to legally secure a six-year tenure for the new chief justice because the court’s role is crucial for his ambitious judicial reform campaign.