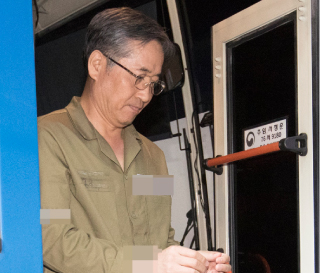 A former senior official of the National Intelligence Service (NIS) was detained Tuesday over allegations that he took charge in the spy agency’s massive political maneuver to benefit the two previous governments.

Choo Myeong-ho, then chief of the NIS domestic intelligence unit, is suspected of directing a string of operations to surveil and disadvantage high-profile figures and celebrities critical of the Lee Myung-bak government.

The Seoul Central District Prosecutors’ Office said it has put Choo under custody on charges of abuse of authority and political interference in violation of NIS law. It is expected to request an arrest warrant for Choo as early as Wednesday.

He is also accused of taking the lead in the scheme aimed at maligning Seoul Mayor Park Won-soon and his key policies. The mayor has filed a complaint with the prosecution asking a formal investigation into the suspicions.

Choo has been under questioning by the Seoul Central District Prosecutors’ Office since Monday. He also faces separate allegations that he was involved in other similar operations under the Park Geun-hye government.

State prosecutors have been digging into allegations that the NIS officials were illegally involved in political activities, including an online slander campaign over the past decade.