Trump to arrive in Korea on Nov. 7 for a state visit

Trump to arrive in Korea on Nov. 7 for a state visit 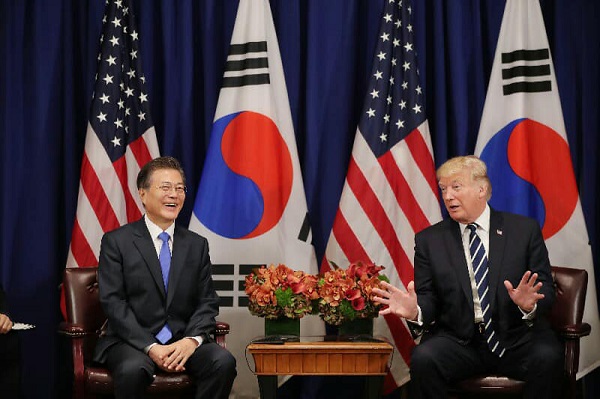 President Moon Jae-in and U.S. President Donald Trump will have a summit in Korea on Nov. 7, presidential offices in the two countries announced on Monday.

According to the Blue House, Trump and his wife Melania will visit Korea on a state visit at the invitation of Moon.
“Trump is the first foreign head of state to visit Korea since Moon took office [in May],” Presidential Spokesman Park Soo-hyun said in a press statement released Monday night. “Trump is the first American president to make a state visit to Korea in 25 years.”

The White House announced the plan as part of Trump’s five-nation Asia tour. He will travel to Japan, Korea, China, Vietnam, the Philippines and Hawaii from Nov. 3 to 14.

Conspicuously missing in the announcements Monday night was when Trump will arrive in Korea. Although the two countries were supposed to make the announcement at the same time, the Blue House called off a scheduled briefing on Monday night and issued a belated press statement after the White House announcement, fueling speculation that some confusion was surrounding the Seoul stop.

As concerns grew that Korea was being treated shabbily compared to countries such as Japan, Park gave another briefing on Tuesday to defend the scheduling.

“Trump will arrive in Korea on the morning of Nov. 7 and leave on the afternoon of Nov. 8,” Park said. “The arrangement was to ensure a smooth flight schedule and to offer proper protocol for a state visit.”

Park said the United States initially planned a two-night, three-day trip because it is Trump’s first presidential visit to Korea. That schedule, however, would have forced Trump to arrive in Korea late on Nov. 6, and the two governments agreed that a morning arrival on Nov. 7 was more desirable.

Park stressed that the state visit will include important events including an official welcome ceremony in the Blue House compound, a presidential summit and a joint media conference. A state dinner and cultural performance and other events to demonstrate the presidential couples’ friendship are also being prepared, he said. “Trump will be received with the highest protocol of the country for his state visit,” he said.

Park said Trump is scheduled to give a speech at the National Assembly. “This will be the only opportunity for Trump to issue a major policy address during his visit to Korea, Japan and China ahead of his trip to Asia-Pacific Economic Cooperation [APEC],” Park said. “We expect him to address not only bolstering the Korea-U.S. alliance and a response to the North Korea’s nuclear problems, but also his policy vision on the peninsula and Northeast Asia.”

According to the White House announcement on Monday, Trump will begin his trip with a stopover in Hawaii on Nov. 3 and receive a briefing from the U.S. Pacific Command. The next stop is Japan and Trump will arrive there on Nov. 5. While in Japan, he will meet with American and Japanese soldiers, meet Prime Minister Shinzo Abe and also attend a meeting with families of Japanese citizens abducted by North Korea, the White House said.

During his visit to Korea, the president will have a bilateral meeting with President Moon and visit American and South Korean soldiers, the White House said. “The President will speak at the National Assembly, where he will celebrate the enduring alliance and friendship between the United States and the Republic of Korea, and call on the international community to join together in maximizing pressure on North Korea,” it said.

The White House said Trump will arrive in China on Nov. 8 for a summit with President Xi Jinping. He will travel to Vietnam on Nov. 10 for the APEC meetings and an official visit to the country and to the Philippines on Nov. 12 for the Association of Southeast Asian Nations (ASEAN) meetings.

“Because Trump’s stay in Japan includes a weekend, he will spend time for official activities in Korea no shorter than the schedule in Japan,” a presidential official said Tuesday.

Japanese media also reported that Trump considered a visit to the Demilitarized Zone (DMZ) but postponed it for safety reasons. Speculation is high that he will visit Camp Humphreys in Pyeongtaek, Gyeonggi.

Trump told reporters on Monday that "we'll take a look" at visiting the DMZ, the heavily-armed strip of land separating the two Koreas. It has been a tradition for U.S. presidents to include a DMZ inspection during their visits to Korea.

The last state visit by a U.S. president was in January 1992, when President George Bush visited Korea at the invitation of President Roh Tae-woo. Trump will also become the seventh American president to address the Korean legislature. President Bill Clinton addressed the National Assembly in 1993.