Only name they need is success

Only name they need is success 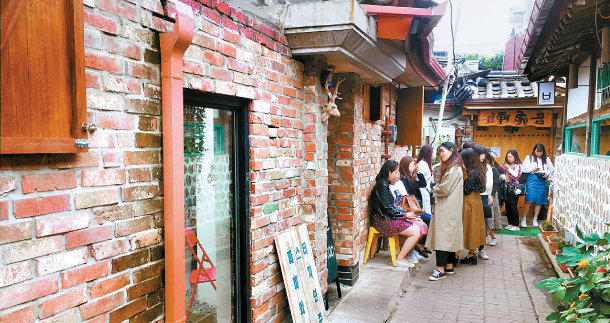 Other than a menu on a wooden board, there are no signs of the establishment’s name at an unnamed Italian restaurant in Seoul’s Jongno District. Many mentions on social media ensure many visitors to the restaurant. [UNNAMED RESTAURANT]

Restaurants and cafes are adopting a “No Name Concept,” with customers in their 20s and 30s finding out about them on social media.

An unnamed Italian restaurant in Yongsan District has lines of customers waiting to get in. Last July, the three young owners remodeled the interior of a house and decided to keep their restaurant nameless. A wooden board outside reading “Pasta, Pizza, Wine, Beer” is the only indicator of what goes on within.

At Onne Sait Jamais in Hannam, Yongsan District, loaves of bread stacked in front of the window are the only hints of a bakery. There is a nameboard on the side of the store but it’s a scrap of paper half the length of a business card.

“I don’t have any intention of putting up an official sign because I want customers to enter the bakery out of curiosity, not because of its name,” said owner Park Ki-dae.

Other stores attract customers in a roundabout way. Jeanfrigo, a box-like cocktail bar, looks like a fruit store. But after passing boxes of oranges, kiwis and apples at the entrance, a visitor can order cocktails, whisky and cheese at the bar. As a sign informs customers, they can also buy the fruit.

“Before, owners were dealing with an audience that didn’t have a specific preference,” according to consultant Kim Yung-sub, who heads an institute that analyzes trends. “But now, they are targeting groups with specific tastes, similar to the owner’s. With the successful marketing of the products and themes, owners no longer feel the need to put a name on the store.”

Lee Ji-han, a regular customer at a bakery with no name in Sinsu in Seoul’s Mapo District said she comes to the bakery at least once a week because she “likes the general vibe of the store.”

Social media promotes the trend. “Consumers decide whether to go to a restaurant by gathering information through social networks,” said Lee Joon-yung, a professor of consumer behavior at Sangmyung University. “Because individuals can indirectly experience the stores through social media and decide whether they want to visit, store locations and signs are not as important as they were before.”

Other establishments following the trend include Unnamed Store, a cake shop in Gaebong in Seoul’s Guru District, and No Sign Kimchi Jjigae in Busan.