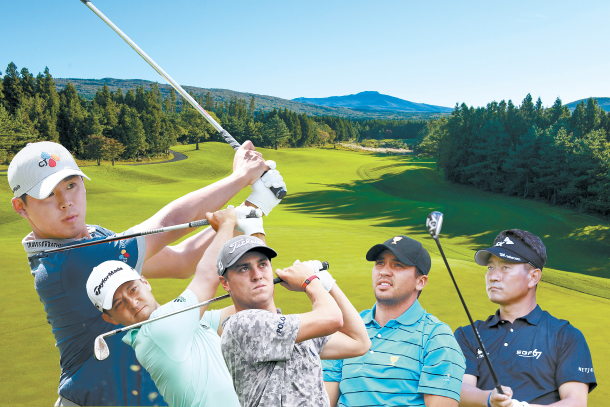 THE CJ CUP @ NINE BRIDGES, the first PGA Tour event to be held in Korea, finally kicks off today at 8 a.m. at The Club at Nine Bridges in Seogwipo, Jeju.

CJ Group will hold the title sponsorship until 2026.

Two years after the Presidents Cup was played in Korea, the PGA Tour has finally extended its Asian series. Though it is the first year the tournament is being held in Korea, the final field has attracted great competition, with 60 of the top 100 golfers in the World Ranking visiting Jeju this weekend for the title.

Just like any other PGA Tour event, the winner will earn 500 FedEx Cup points in addition to the $1.665 million purse. 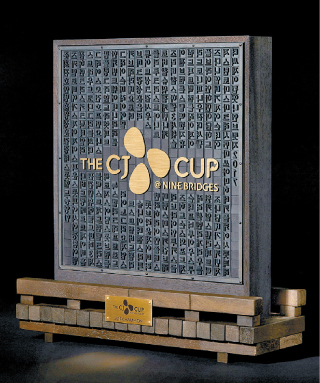 The trophy for The CJ Cup @ Nine Bridges, the first PGA Tour event to be played in Korea. [CJ GROUP]

As this was the first PGA tour event to be hosted in Korea, CJ Group has given domestic players as many exemptions as possible. In addition to the top 60 players from the FedEx Cup, five KPGA Tour players and three Korean players from the Official World Golf Rankings were given exemptions to play this weekend. With five additional exemptions given to the Asian Tour players and eight sponsor exemptions, which included five PGA Tour members, the field of 78 players will be playing all four rounds since the tournament doesn’t have a cut after the first two.

These exemptions allow the tournament to have the most number of domestic players competing this weekend, or 18 total.

The trophy for the event was unveiled on Oct. 9, Hangul Day. It weighs 3.6 kilograms (7.92 pounds), is 36 centimeters (14 inches) wide and 39.5 centimeters tall. On it, all 78 players’ names have been engraved in hangul, the Korean script. The champion’s name is expected to be printed in gold in the center. The trophy’s wooden bridge-shaped stand is a model of the bridge at the 18th hole of The Club at Nine Bridges.

The golf course was the first one in Korea to appear on Golf Magazine’s top 100 list of courses. It was home to the LPGA Tour’s CJ Nine Bridges Classic from 2002 to 2005, which is now the KEB Hana Bank Championship, due to a sponsor change. In addition, it has also hosted the annual World Club Championship in 2015, and will again in 2018. This weekend, the par-72 course will be played at 7,196 yards.

The tournament will be hosted by the main sponsor of Kim Si-woo, who aside from his victory at The Players Championship, has been receiving little attention due to a back injury. After his big win, he missed four cuts while withdrawing from two PGA Tour events out of 11 played. Making his Presidents Cup debut two weeks ago with a record of one win and two losses, he earned the only point to the international team during the four-ball matches, along with his partner, Anirban Lahiri of India.

“Since this is the first PGA Tour tournament in Korea,” he said at a press conference on Tuesday, “and my sponsor is the main sponsor of the event, the pressure is on.”

Kim’s group is expected to be among the group with the biggest galleries today, as he is paired with Adam Scott and Jason Day of Australia. The group will tee off at 8:40 a.m. on the 10th hole.

Heading into the weekend as the highest-ranked golfer in the field, Justin Thomas, ranked fourth in the world, has arrived in Jeju. Having already won five tournaments in the 2016-17 season, Thomas was the winner of this year’s $10 million bonus, winning the FedEx Cup as well as the PGA Tour’s Player of the Year award. His 2016-17 season was all about setting records.

Starting from a round of 59 during the first round of the Sony Open in Hawaii in January, Thomas set the lowest 72-hole record at 27 under par, 253, and the lowest U.S. Open 18 hole score of 63, nine under par, during the third round. At the CIMB Classic, the first tournament played after the FedEx Cup Tour Championship, he hoped to defend his title for the third consecutive season, but tied for 17th.

He will tee off at 8:30 a.m. on the 10th hole along with Bae Sang-moon of Korea and Pat Parez of the United States.

Xander Schauffele, the 2017 rookie of the year, started receiving attention with his fifth-place finish at the U.S. Open, golf’s most prestigious tournament. It didn’t take Schauffele long to reach the top of the leaderboard, as he concluded his rookie campaign winning the Greenbriar Classic and the Tour Championship. The two victories allowed the super rookie to make a significant jump in the World Ranking, from 352nd during the U.S. Open to 32nd by the end of the season.

Last season, Schauffele was one of six multi-winners on the PGA Tour. He is the first rookie to be a multi-winner since Keagan Bradley of the United States in 2011. In addition, Schauffele finished third in the FedEx Cup ranking, which is the highest ranking by a rookie in PGA Tour history.

Starting on the first hole, Schauffele will tee off at 9:30 a.m. along with Marc Leishman of Australia and Daniel Berger of the United States.

The former No. 1 ranked golfer may have struggled throughout the 2017 season, but he is ready for another battle this season. For the first time since 2013, Day had a winless season in 2016-17. Despite the challenges Day suffered, he still managed to advance to the Tour Championship last season and had top-25 finishes in his last six tournaments. Aside from the Presidents Cup, this will be Day’s first individual tournament of the season.

Choi Kyoung-ju, a veteran on both the PGA Tour and the KPGA Tour, and a pathfinder for Korean golfers in the United States, may not be familiar to younger fans, but has managed to pick up eight total PGA Tour victories.

“This tournament will allow our players to see what they haven’t seen,” Choi said. “There are a few golfers in the top ranking who are missing this weekend, but most are present. Korean players will learn a lot from this, and it will allow them to dream bigger.”

Choi will tee off at 9:40 a.m. on the first hole with Jhonattan Vegas of Venezuela and Patrick Reed of the United States.