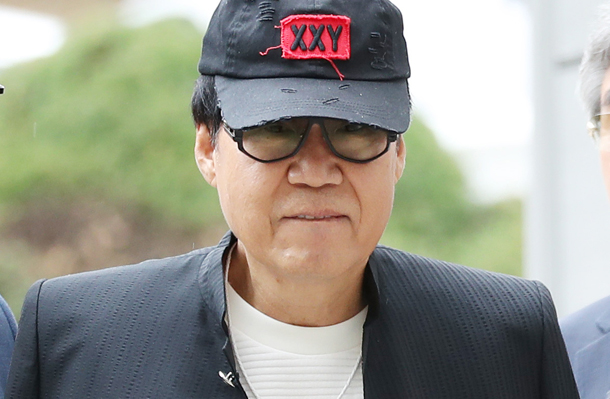 Singer and painter Cho Young-nam walks out of the Seoul Central District Court after he was found guilty of fraud. [YONHAP]

Cho Young-nam, a popular Korean singer, author, television celebrity, radio show host and artist, was found guilty of fraud on Wednesday, as he fooled buyers over years that all of his works had been done by himself.

Cho was sentenced to 10 months in prison, with two years of probation at the Seoul Central District Court. The court said he did not provide enough information to buyers about his having other artists paint his works. The court added that the level in which other painters were involved with Cho’s artworks is beyond what’s commonly accepted.

The paintings Cho worked on are mostly inspired by hwatu, a Korean card game also known as Go-Stop. [JOONGANG ILBO]

The paintings were mostly inspired by hwatu, a Korean card game also known as Go-Stop.

“Even if the accused provided an idea or material during the process, and even participated in making final touches, most of the creative expression is done by others,” said the court. The judge said Cho only gave rough directions and an artist surnamed Song, who was hired to paint for Cho, chose materials to Song’s liking. Cho simply covered the costs for the materials.

“It is difficult to see selling these works as [an artist’s] own creation as part of common practice in the local art scene, and Song should be considered an independent artist making artwork rather than hired help to assist Cho.”

The court also considered the buyers’ point of view: Whether the artist participated in the creation of his works could have played a role in them making their purchases or the prices of works.

Cho claimed that it is customary in the art scene for artists to provide ideas and others to execute. However, the court saw that Cho didn’t systemically manage the artists he worked with and only a limited number of people knew that he was working with others while other popular artists like Andy Warhol had a system to hire the help.

Additionally, buyers of these artists’ works were all aware of the fact that the creation of the artworks were executed by others. The court also added that Cho’s actions had damaged the trustworthiness of the local art community and caused confusion in the market.

Cho’s manager, surnamed Jang, was also indicted for his role as a part of the scheme. Jang was ordered to serve four months, with one year of probation.