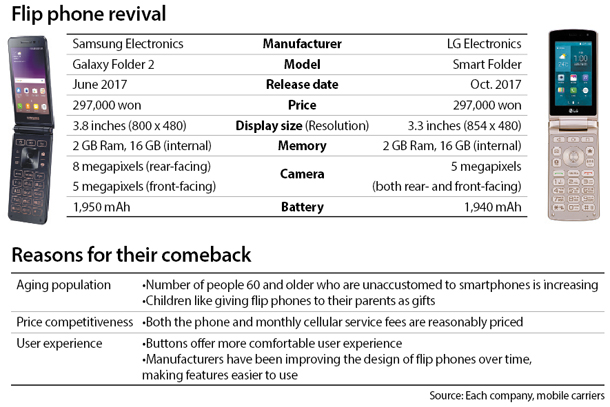 Flip phones are making a comeback, getting a second life in the form of smart flip phones.

These two-display devices can connect to the internet, run apps like KakaoTalk and take pictures like an iPhone or Galaxy, but they bear resemblance to classic flip phones, with keypads and all.

SK Telecom, Korea’s largest mobile carrier, launched exclusive sales of LG Electronics’ Smart Folder phone on Monday. The retro-looking device has a tactile keypad on one half and a 3.3-inch touch display on the other.

It comes with two cameras, one facing the front and one facing the back, each with a resolution of 5 megapixels, about half that of conventional smartphones on the market.

Smart flip phones have emerged as a niche market, and their sales have performed beyond expectations. Samsung Electronics’ Galaxy Folder 2 has been posting daily average sales of 2,000 phones since its release in June. The model carries the same price tag as LG’s Smart Folder, and most of the features are similar.

LG launched its first smart flip phone, the Wine Smart Jazz, in September 2015. The seven models in its Wine smart flip phone collection have accumulated over five million sales in Korea so far.

“The Wine phones have been a steady seller, even though we did not expect too much from it initially,” a company spokesman said. “We have rediscovered the value of flip phones, which were considered a relic of the old age at the beginning of the smartphone age.”

Why are smart flip phones so popular? Experts cite several reasons. One is an aging population. On SK Telecom’s online shopping site, T World Direct Mall, 74 percent of those who purchased smart flip phones were 60 or older. Their children have also been gifting the phones, earning the nickname “hyodo (filial piety) phone.”

“Older people have a hard time typing with precision on smartphones due to farsightedness,” said Joo Dae-young, a senior researcher at the Korea Institute for Industrial Economics and Trade.

“By comparison, flip phones have a wide tactile keyboard,” he said. “Frequently used apps like KakaoTalk can be easily launched by pushing a dedicated button.”

Unlike younger users who prioritize the latest features when shopping for smartphones, older users prefer economical devices with just the essentials. Smart flip phones have become the answer.

“I only need a phone to check stock prices while in the car,” said Lee Hyun-dong, 68, who uses a Galaxy Folder 2. “Smartphones are normally too expensive and complicated with unnecessary features, which made me give up buying them.”

With the smartphone market increasingly saturated, both smartphone manufacturers and sellers have been striving to find niche products. Manufacturers have continued to invest in improving the user experience of smart flip phones, and their efforts are bearing fruit.

SK Telecom and LG Electronics conducted a user experience survey of customers aged 60 and older while preparing to launch their latest smart flip phone. Based on the survey results, LG applied an automatic lock on the touch display to prevent inadvertent taps during phone calls and a separate button to completely turn off data.