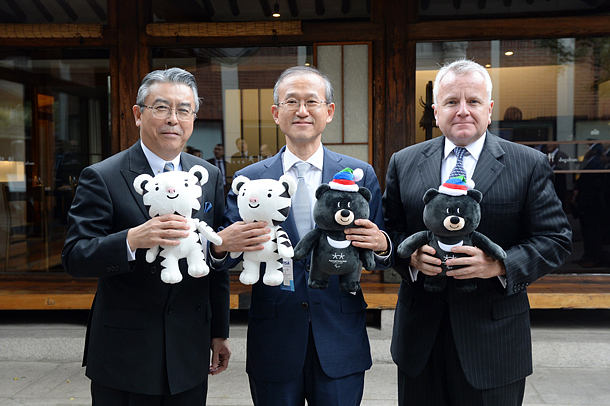 Senior diplomats from South Korea, Japan and the United States called for all diplomatic options to be exhausted to completely dismantle the North Korean nuclear program in a peaceful manner at a vice foreign ministerial meeting held in Seoul on Wednesday.

Lim told reporters that they “shared a review of the current situation and agreed to make all possible diplomatic efforts, including sanctions and dialogue, through close coordination among the three countries.”

He emphasized that the three countries agreed to manage the situation on the Korean Peninsula in a stable manner while simultaneously continuing to pressure the North.

Sullivan likewise said Washington is “dedicated to the campaign of pressure” on North Korea amid President Donald Trump’s remarks last month that he is ready to “totally destroy” North Korea at the UN General Assembly.

He said that the president has “made clear that all options are on the table with the unpredictable regime in Pyongyang, we have to be prepared for all contingencies,” adding, “We undertake those preparations in close consultations with our allies in Tokyo, Seoul and elsewhere.”

He said, “The Trump administration’s approach to North Korea has been consistent since the start of the administration. And that is a rejection of the past policies of other administrations that have failed to curb the threatening activities in Pyongyang.”

Sullivan also said that Trump “welcomes the opportunity to come here to be welcomed with a state visit, to meet and discuss issues with the government of South Korea and to address the South Korean people in the National Assembly.”

Lim also met with Sullivan on Wednesday morning before the trilateral meeting. The meeting came just weeks before Trump’s upcoming visit to Seoul on Nov. 7.

China kicked off its 19th Congress of the Communist Party on the same day to confirm a second five-year term for President Xi Jinping and elect a new leadership.

Korea’s Foreign Minister Kang Kyung-wha met with Sullivan and asked the U.S. government to appoint an ambassador to Korea as soon as possible.

After former U.S. Ambassador to Korea Mark Lippert’s departure in January, the post has remained vacant.

Kang, in a meeting with Sugiyama, emphasized that Korea, the United States and Japan “need to work together, whether it be about sanctions against or dialogue with the North, to realize complete and peaceful denuclearization of North Korea,” said Korea’s Ministry of Foreign Affairs in a press release Wednesday. Kang also told him that she hopes the bilateral relations “will continue to prosper in a future-oriented cooperative partnership,” to which Sugiyama agreed.

“Lim and Sullivan closely coordinated preparations for Trump’s visit to Korea in November and policies on North Korea and the U.S.-South Korea alliance,” said Korea’s Foreign Ministry in its statement. “Lim welcomed the state visit of a U.S. president to Korea, the first in 25 years, and suggested Korea and the United States continue to coordinate closely for a successful summit.”