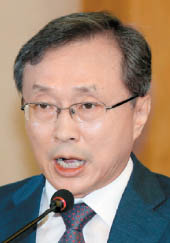 But he failed to end months of controversy about who would be the new chief justice.

Park also said Yoo, 60, is highly praised for his abilities and character. “He was previously considered as a Supreme Court justice candidate by the nomination committee and a Constitutional Court judge candidate by the Korean Bar Association,” Park said.

The court’s nine-member panel is appointed by the president, legislature and the Supreme Court chief justice. The president also has the right to name the chief justice from among the nine judges. As of Wednesday, the court has eight justices and no chief justice. Judge Kim Yi-su has been serving as acting chief justice since March.

Moon did not say Wednesday whether he will name Yoo chief justice. The Constitutional Court’s incumbent judges had urged Moon to name a new chief as soon as possible, rejecting his intention to allow Kim to continue operating the court as the acting head.

“Moon will soon name the new chief among the nine judges,” a key presidential aide said Wednesday. “The timing will come after Yoo passes a confirmation hearing. Yoo will be one of the candidates.”

A National Assembly confirmation hearing is necessary for appointing a Constitutional Court judge but it is not binding. The legislature’s approval, however, is required to appoint the chief justice.

While the Blue House stressed that all nine judges of the court are candidates to head the court, speculation is high that Yoo will get the job.

Moon has asked the National Assembly to revise the law governing the court to make more specific clauses on the tenure of the Constitutional Court chief justice before he makes an appointment. As of now, the law lacks specifics on the chief justice’s term. Whether the chief justice’s six-year term starts anew with the appointment or ends at the conclusion of his or her remaining tenure has been debated for years.

Asked if Moon will name a new chief justice before the legislature revises the law, a presidential source said, “It is something the National Assembly should take care of. The Blue House will act based on its steps.”

Another senior official of the Blue House said the National Assembly should make the revision as soon as possible in order to protect the law’s intention that a veteran member of the legal community should head the court. In addition to the prerequisite of being a Constitutional Court judge, the chief justice must have more than 15 years of experience as a judge, prosecutor or lawyer and must be over 40 years old.

If Yoo is confirmed as the Constitutional Court judge and then as chief justice, he will be able to head the court for a full six-year term. Observers have said Moon wants to legally secure a six-year tenure for the new chief justice because the court’s role is crucial for his ambitious judicial reform campaign.

Yoo is a judge known for his liberal stances. He is a founding member of the Society for Research on Our Law, a study group of liberal judges. If Yoo is formally appointed, he will become the first member of the group to join the Constitutional Court bench. Supreme Court Chief Justice Kim Meong-su is also from the group.

A native of Mokpo, South Jeolla, Yoo graduated from Seoul National University law school and passed the bar exam in 1981.

During the Roh Moo-hyun administration, Yoo served as a judicial policy researcher for the Court Administration Office under the Supreme Court, participating in a judicial reform program.