Seoul mayor says he will work to promote growth

Seoul mayor says he will work to promote growth 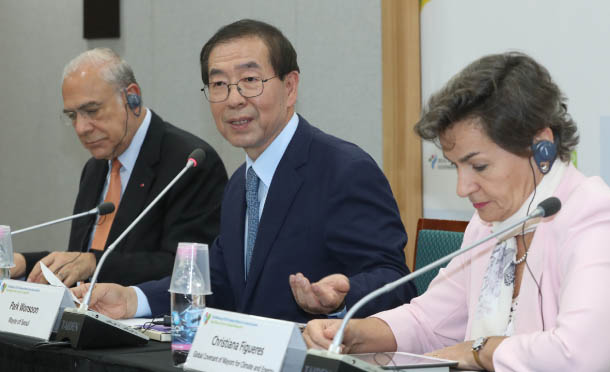 Seoul Mayor Park Won-soon vowed to work with some 50 mayors throughout the world to promote inclusive growth and climate change as part of the Seoul Implementation Agenda, to be announced today with OECD Secretary General Angel Gurria at the Third Meeting of OECD Champion Mayors for Inclusive Growth at Conrad Hotel in western Seoul.

“As you know, climate change issues like air pollution, heat waves and cold snaps are not isolated to one city, but something that the world needs to take on together,” said Mayor Park in a press conference at the City Hall in central Seoul on Wednesday. “The solutions lie in energy policies and efforts to curb economic inequality. And they will be discussed in the meetings on Thursday and Friday among mayors and representatives of cities throughout the world.”

The Seoul Metropolitan Government, the OECD, C40 Cities Climate Leadership Group and Iclei (Local Governments for Sustainability) are hosting the Third Meeting of OECD Champion Mayors for Inclusive Growth at Conrad Hotel today and the Seoul Mayors Forum on Climate Change 2017 at the same location Friday.

“We will work in partnership with the people, firms and institutions in our cities to respond to the global challenges posed by inequalities, social exclusion and climate change,” states the Seoul Implementation Agenda. “We also recognize that to continue to improve well-being over the long term, the sources of economic growth must be sustainable, just as our economies must be resilient to future climate impacts. This will require a transition from carbon-intensive to carbon-neutral behaviors and practices.”

The OECD secretary general pointed out some inequality issues here and what cities in turn can do to address similar problems.

“You still have a very big gap between the participation in labor market of women vis-a-vis men, and that involves also very large pay gaps,” said Gurria. “The second issue you have is the elderly - Korea is a country which has the highest danger among the OECD countries of having poor and old people. And the reason is because of your seniority pay system - because companies pay people more depending on how long they have been in the company regardless of the productivity.

“And the youth,” he added. “There is absolutely no reason that in a country like Korea there is a high unemployment rate - you should have every single hand on deck. So where is all of [the experiments] going to happen? With support from the national governments, it is going to be operated in the cities mostly.”

This is the first time that the Meeting of OECD Champion Mayors for Inclusive Growth is taking place in Asia. The first took place in New York in March 2016 and the second in Paris in November that year.