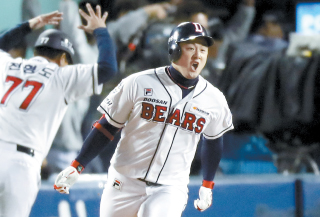 Choi Joo-hwan celebrates after scoring a grand slam for the Doosan Bears against the NC Dinos on Wednesday. Choi was named MVP for the match. [YONHAP]

The Doosan Bears’ huge 17-7 victory against the NC Dinos on Wednesday has leveled the playing field in the second round of the playoffs, with the series score tied at 1-1.

On home runs, the teams actually tied with four each, breaking the record for the most home runs ever scored in a postseason game - one of a number of records that fell on Wednesday evening. The number of home runs was made all the more impressive as the game was played at Jamsil Baseball Stadium in southern Seoul, the biggest baseball stadium in Korea. Due to its size, fewer home runs are normally hit at Jamsil compared to any other stadium.

But it was RBIs, not home runs, that won the game.

The Bears’ Park Kun-woo opened the scoring with a solo home run at the bottom of the first, allowing the Bears to take a 1-0 lead. The Dinos responded immediately, with Ji Suk-hoon hitting a home run at the top of the second, followed immediately by Kim Sung-wook knocking a two-run home run out of the park.

The Bears bounced back with a three-run home run from Kim Jae-hwan, but Na Sung-bum responded with a two-run home run, once again putting the Dinos out in front with a 6-4 lead.

Things started to unravel for the Dinos at the bottom of the sixth, when the Bears scored eight runs, including a grand slam from Choi Joo-hwan. This was the second grand slam of the series, after the Dinos also bagged a four-run home run in the game on Tuesday.

The eight runs scored at the bottom of the sixth took the score to 12-6, allowing the Bears to tie the record for the most runs scored and the most RBIs in a playoff game - records they would go on to break.

Xavier Scruggs hit a solo home run at the top of seventh, also the Dinos’ fourth of the day, but it was too little, too late for the Dinos as things only went from bad to worse in the last few innings.

Both team’s explosive batting allowed them to set new records for the most runs and RBIs scored in a postseason game. Together, they scored 24 runs. The previous record was 18.

The Bears’ 17 runs were also the most ever scored by a KBO team during a playoff game. The previous record, also set by the Bears, was 16 runs against the Samsung Lions on Oct. 25, 2001.

Jang Won-jun, the Bears’ starting pitcher, struggled and gave up ten hits, including three home runs and six runs while pitching five and one third innings. Jang’s struggle was quite a disappointment as he had only given up one home run against the Dinos in the last three years - in the second round of the playoffs in 2015.

“We are back to square one with a win and a loss,” said Bears’ manager Kim Tae-hyung. “Our starting pitchers are giving up more runs than I expected, but I will have to trust them. I thought the game would be in our favor if Jang had pitched the way he can. We were able to win because our batters did well. Though Nick Evans has the ability to make big hits, he didn’t have great contact. So I put Choi Joo-hwan in, who can make great hits against Lee Jae-hak.”

While Kim Tae-hyung stayed with Jang until the sixth, Kim Kyung-moon, the manager of the Dinos, was quick to change pitchers. Just like the game against the Giants, Kim Kyung-moon rotated nine different pitchers, but it wasn’t enough to overcome the Bears’ batters. After Lee Jae-hak gave up four runs in the first three innings, Jeff Manship got on the mound at the bottom of sixth with batters on first and second bases.

Manship’s appearance in the Dinos’ bullpen was Kim Kyung-moon’s last chance to turn the game in the Dinos’ favor, but Manship actually allowed the Bears to extend their lead, giving up three runs in one third of an inning.

“Our batters did better than I thought against the Bears’ starter, Jang Won-joon,” said Kim Kyung-moon. “I continued the game with Lee Jae-hak to give him confidence, but it didn’t lead to a good result. I put Manship on the mound because I trusted him more than Won Jong-hyun or Kim Jin-sung but he also gave up runs. I believe that Manship will be better next time. Hacker will be the starter for the third game, but I haven’t yet decided on the fourth starter. I think it’ll be among our bullpen pitchers.”

The third game between the two teams will begin at 6:30 p.m. today at Masan Baseball Stadium in Changwon.