Justin Thomas ahead at PGA Tour in Jeju

Justin Thomas ahead at PGA Tour in Jeju 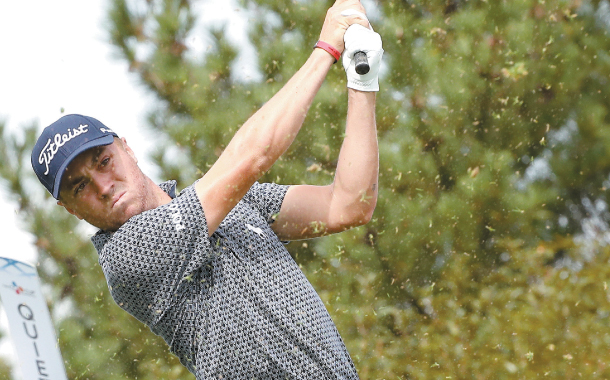 Justin Thomas tees off at the fourth hole in the first round of The CJ Cup @ Nine Bridges in Seogwipo, Jeju, on Thursday. [YONHAP]

SEOGWIPO, Jeju - Justin Thomas has taken a three-shot lead after the first round of The CJ Cup @ Nine Bridges in Seogwipo, Jeju, on Thursday.

Thomas started his round with a bogey on the par-four 10th hole, but it didn’t take long for his scores to go down, as he made an eagle to get one under par on the par-five 12th hole. Then he had four consecutive birdies and made another eagle on the par-five 18th for seven under par in his first nine holes.

With three additional birdies and a bogey in the second half of his round, Thomas finished nine under par with 62, but remained unsatisfied.

“It was obviously a great start,” Thomas said after the round. “It got a little tough around the last five to six holes, but I made it. I’m really disappointed on those last nine holes. I felt like I had really good opportunities to shoot something really well. I birdied the last hole and that was great. Good way to finish.”

Thomas believed that he was given a lot of birdie opportunities thanks to the wind, as it allowed him to hit more wedge shots. The 110- to 125-yard shots on fairways allowed him to have less course knowledge and to play the course on the lighter side.

“Today was a result of good playing, good driving and good capitalizing on some early opportunities on scoring,” Thomas said.

“It really depends on the wind condition. I’m just going to take it hole by hole, shot by shot, just like any other course.”

Today, Thomas will start his second round on the first hole at 9:30 a.m., along with his first-round group, Pat Parez of the United States and Bae Sang-moon of Korea, who shot three under par and even par to tie for 20th and 38th, respectively.

Jason Day, the 10-time PGA Tour champion, slowly made his way up to tie at 12th, shooting four under par. After a winless 2016-17 season, he played his first tournament of the 2017-18 season with eight birdies, with a double and a bogey in the first round.

Playing along with Day, Kim Si-woo concluded his first-round shooting two under par to tie at 20th. He struggled on the first few holes, making two bogeys and a double bogey, citing the pressure of having to play well, as the tournament is hosted by his sponsor.

But starting from the ninth, Kim picked up his pace, finishing his first nine with an eagle to shoot even par and shooting two under par in the second half of the round.

“I’m very delighted to take part in this tournament and I was also very happy to meet all the fans in Korea,” Kim said after the round.

“Overall, I’m very satisfied with my game. Of course, I could have improved my drive shots and tee shots so I could have created more chances. I look forward to the next three rounds.”

Starting on the first hole, Kim, Day and Adam Scott of Australia will play their second round at 9:40 a.m. today.

Among the 17 Korean golfers in the field, Whee Kim leads the group at four under par, tied for 12th.

The CJ Cup @ Nine Bridges is the first official PGA Tour to be hosted in Korea and the winner will receive 500 FedEx Cup points in addition to the $1.665 million winning purse.