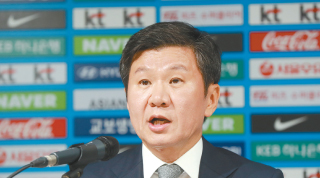 Chung Mong-gyu, president of the Korea Football Association, speaks at a press conference in Seoul on Thursday. [YONHAP]

Chung Mong-gyu, head of Korea’s football governing body, apologized Thursday for the national team’s recent poor performance and vowed to use all available resources to help the Taeguk Warriors in next year’s World Cup.

The Korea Football Association is in hot water following the national team’s dismal performance with head coach Shin Tae-yong, who took over the helm in July. Although Korea has qualified for the World Cup under Shin, the 46-year-old coach has yet to collect a win for the team.

After posting two scoreless draws with Iran and Uzbekistan in qualifying matches last month, Korea lost 4-2 to Russia on Oct. 7 and 3-2 to Morocco on Oct. 10 in two friendly matches.

With these results, Korea’s FIFA ranking in October fell 11 spots to No. 62, the lowest position this year and even below No. 57 China. This is the first time Korea has fallen below China in the FIFA ranking since the governing body for world football adopted the system in 1993.

Chung said he would now manage national team matters in detail and added that the association is in the process of hiring experienced foreign assistants for Shin. The president also said they would arrange friendly matches with football powerhouses in Europe and South America, so that Korea can identify their weak points and make improvements. For two friendlies in November, Chung said Korea will host Colombia and Serbia.

“The technical committee needs to function consistently for the development of Korean football,” Chung said, “but it couldn’t have long-term plans because its leader always changed following the national team’s performance. We will create a committee that will only handle national team coach hiring issues, and the technical committee will focus on setting long-term plans for Korean football.”

Chung said he still has trust in Shin even though some fans have been demanding the football association bring back Guus Hiddink, who guided Korea to the 2002 World Cup semifinals. The Dutch coach recently said he was willing to help Korean football in any way, but confirmed he would not take an official position.

“It’s true that the Korea Football Association didn’t react properly in the first place regarding the Hiddink issue,” Chung said, “but we know this isn’t the main thing that fans want. I know fans want the KFA to change. I will also look for change and innovation to develop Korean football.”

The football association has also been criticized for its lack of administrative transparency. Last month, police arrested several former and current employees for allegedly using the group’s money for private use between 2011 and 2012.

Chung said even though the misdeeds occurred before he became president, he still felt responsible and would take active measures to prevent such wrongdoing in the future. Chung said he would conduct a personnel reshuffle soon.

“We’ve been trying to set up a system to prevent corruption since I came,” he said. “For those who are convicted, we’ll mete out reasonable punishment.”