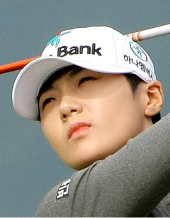 Park Sung-hyun has won the LPGA Tour’s Rookie of the Year award.

The LPGA announced Thursday that Park, world No. 2, has secured the top rookie honors with five tournaments left in the 2017 season. The 24-year-old becomes the 11th player from South Korea to be so honored, and third in a row after Kim Sei-young in 2015 and Chun In-gee in 2016.

Park, who captured the U.S. Women’s Open for her first major and first LPGA win, holds a 798-point lead over Angel Yin of the United States, at 1,413 to 615. Rookies earn 150 points for tour wins, and they’re doubled for majors and the season-ending CME Group Tour Championship. Yin will only play in four more events, meaning she still won’t have enough points to surpass Park even if she wins all of her remaining tournaments.

“I am honored to receive this award, which was one of my goals from the beginning of the season,” Park told the LPGA. “This is really special because you only get one chance in a lifetime. Taking this opportunity, I want to be a better player.”

In addition to the U.S. Women’s Open, Park won the Canadian Pacific Women’s Open, and has six top-10 finishes. Through last weekend’s action, Park also leads the tour in money with a little over $2 million, making her the fastest player in the tour history to surpass $2 million in career earnings, at seven months and 13 days. Park is No. 1 in scoring average and third in the Player of the Year points. She will receive the top rookie award at the 2017 Rolex LPGA Awards ceremony, to be held Thursday, Nov. 16.