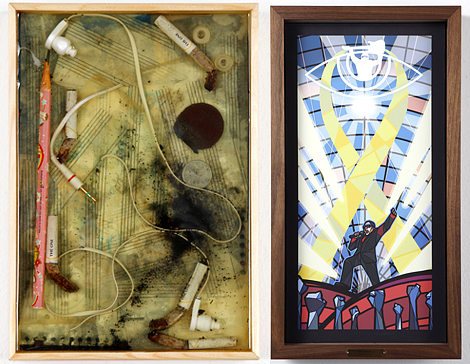 Left, “Untitled no. 2,” which was found in Shin’s studio. Right is “Here I Stand for You,” by the artist Lee Chang-ho, representing Shin’s identity as a rocker and his idealism in music. [JEAN GALLERY]

On the wall of Jean Gallery in Jongno District, central Seoul, the enormous face of singer Shin Hae-chul, wearing his iconic sunglasses is grinning mischievously while picking his nose. It certainly attracts the attention of the passersby, but it is not a mere wall painting; it is the piece “Nose-picking Shin Hae-chul” by the artist Koo Na-hyun, part of the exhibition “Thoughts on Thoughts” to commemorate the third anniversary of the death of Shin (1968- 2014).

Domestic artists active in various genres of art are currently presenting their works at the Jean Gallery, adding their “live angles” on Shin’s thoughts. Many of them were, and still are, ardent fans of Shin, not only for his music but also of the man himself.

“It may sound like an exaggeration, but Shin was a beacon of light during my adolescence,” architect and an installation artist Yang Soo-in said. “Since all of us go through puberty, you will understand that I needed a symbolic figure to guide me in the right path. Shin’s music gave me certainty about how to define my own view of life. And I know that Shin was that kind of figure for many young people at the time.”

The exhibition is largely divided into four parts: thoughts on Shin’s life, his symbolism, his space and his music. It is the first time a museum exhibit has been made to commemorate Shin.

Although Shin was loved and respected by his fans for many different reasons, the keyword of this exhibition is “courage.” His bravery and willingness to raise his voice against the world’s biases and critics, to try new areas of music despite financial losses, and to console minorities and young people.

Consisting of work from architects, photographers, painters, installation artists, designers and tattoo artists, 23 people from creative industries have depicted Shin in their own unique styles. They visited Shin’s studio, which has been left untouched since his death, in search of inspiration for their works. Some were made before the planning of the exhibition, while others created their pieces specifically to be shown at the museum’s special event.

At left, “Untitled,” by the artist Jo Hyun-soo, depicting Shin. “Nose-picking Shin Hae-chul,” center, by the artist Koo, is painted on the exterior of the museum. At right, “Studio No. 8 Pigment Print 2017” by the photographer Shin Kyung-sub, a picture of the Shin’s studio, which has remained untouched since after his death. [JEAN GALLERY]

The exhibition leaves out unnecessary explanations that could be looked up elsewhere easily. For instance, when using excerpts from his lyrics, there are no explanations about the songs, assuming that the viewers are aware of their origins, or that they can search for them later on. The museum has basically excluded any information that could hinder the audience’s concentration on the artworks, leaving the pieces to speak for themselves.

In the fourth section, viewers can become artists themselves through artist Lee Hae-young’s piece, “Destruction of the Shell.”

As Shin filled his music with messages about life, the audience can throw colorful paint in balloons while listening to his music, expressing the emotions that they feel through the paint.

“Some of the artists are not mainstream and may be unfamiliar to the public,” said the art director Shin Min, an active promoter of the exhibition.

“Thus, the arts may also be unfamiliar. However, we organized this exhibition with artists who are confident about their work although they are not in the mainstream group. We hope participating in Shin’s exhibition will leave a record as a stepping stone for the upcoming artists, who are striving to establish their own paths with clear convictions in their respective fields.”

The exhibition will be open until Nov. 30 from 10:30 a.m. to 6 p.m. on the weekdays and will close one hour earlier on the weekends. Monday is the gallery’s regular holiday. Jean Gallery is a five-minute walk from Gyeongbokgung Station, line No. 3, exit 3.