A group of seven silicone sculptures in vivid colors now stand in the K2 space of Kukje Gallery, east of Gyeongbok Palace in central Seoul.

Two of the sculptures - the sky blue and chocolate-colored figures - are shaped like a woman in the style of a primitive idol with funny-looking hands and feet. The other two, in red and white, have similar but much more abstract shapes, with mysterious grids dug into their surface. The other three, in cobalt blue, black and white, have even more abstract and skinny shapes, which give them the look of mummified aliens.

This grotesque but intriguing group of sculptures is the latest work by Paul McCarthy, one of the world’s most influential artists. They are part of the 72-year-old American artist’s solo exhibition entitled “Cut Up and Silicone, Female Idol, WS,” which runs at the gallery until Oct. 29.

“Female Idol” refers to the group of sculptures, which were inspired by a painting from French avant-garde artist Francis Picabia (1879-953) titled “Woman with Idol.”

At first, the sculptures seem to have no relation with McCarthy’s famous series “White Snow” or “WS,” which are made up of sculptures, drawings and video pieces that twist the Walt Disney animated film “Snow White and the Seven Dwarfs”(1937) in a grotesque manner.

But, visually, the “Picabia Idol” series has similar qualities to the “Nine Drawfs” that McCarthy presented as part of his “WS” series in this gallery five years ago that created a sensation among Korean art lovers.

“I like the fingers of Picabia’s idol, as their shapes are similar to those of Mickey Mouse.” McCarthy said, smiling, at the gallery last month. “And I was fascinated by his attitude towards abstraction… new way of seeing.”

This solo exhibition is focused more on formalism in McCarthy’s works, whereas the show five years ago was focused on sociopolitical undertones behind globalized American mass media and mass culture including Disney. 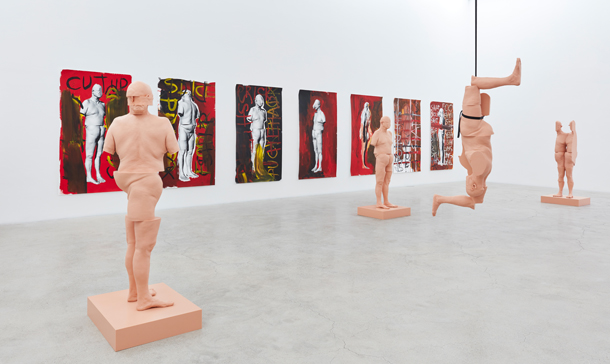 Beside the seven “Picabia Idol” sculptures are two sculptures that depict the head of “White Snow,” McCarthy’s adaptation of Snow White. Viewers might read the delicate suggestions of sex and violence from the head with a mysterious smile, with some parts of its surface crushed, while a pipe pierces its neck. There are two other pieces of sculpture that seem to be more abstract versions of the head.

But the sculptures are not only meant to have sociopolitical undertones. Their shapes also speak about McCarthy’s working process and beauty of abstraction unexpectedly discovered from the process, the artist explained.

He makes sculptures mainly in clay. Then he makes their molds and casts silicone sculptures from the molds.

“The process of making sculptures in clay is a sort of performance on the sculptures,” the artist said. “I’ve come from a background in which performance art is critical and is the foundation of what I do.”

“So, the clay sculptures have lots of the evidence of that process. There are objects like pipes, shovels and buckets that were used in this process of making. I leave them as part of sculptures themselves.

McCarthy said the original clay pieces and the cast rubber pieces have circular relations with each other. “When you put the mold on top and remove [the] molds, part of the [clay] pieces go with molds. That alters it and creates new abstraction,” he said. 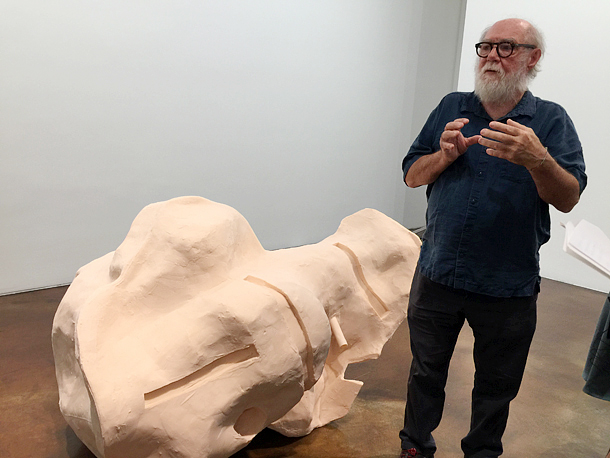 The abstract versions of “White Snow Head” and “Picabia Idol” are also the by-products or “spin-offs” from the process, the artist said.

“A few years ago, I made ‘White Snow’s Head,’” he said. “Then, I made a core to be put inside the mold for a rubber piece. [A core is a kind of skeleton put in the center of a mold used to cast a silicon sculpture.] The core was sitting there on the studio. I really loved the shape. It resembled the rubber character of the Snow White but yet was a really interesting abstraction, It happened by coincidence .?.?. the shape of the core was not done to create aesthetic effect but for practical reasons. Still it had new beauty of abstraction.”

The K3 Space of the gallery also exhibits the artist’s “Cut-Up” series based on his own body.

“As part of being in a history of performance art in the 1960s and ’70s, the body, in particular, your own body, was considered the material for sculptures or other artworks,” the artist said. “So, my body and myself has been always subject of my works.”