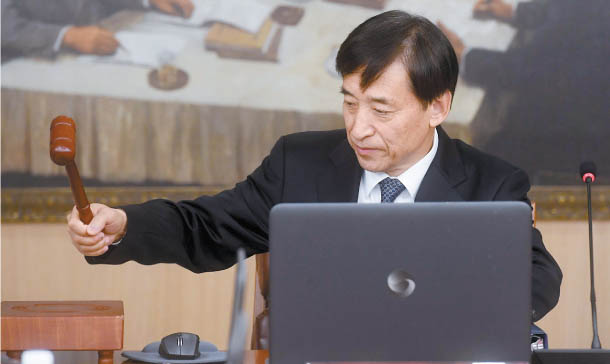 Korea’s central bank sent its clearest signal yet of a coming interest rate hike on Thursday thanks to an overall upturn in economic conditions, which spurred the Bank of Korea to raise its outlook for economic growth for the year to 3 percent.

Governor Lee Ju-yeol said the bank’s monetary policy committee kept its benchmark interest rate unchanged at 1.25 percent for the time being, although one of the committee members voted for an increase during the rate setting meeting.

“Board member Lee Il-houng suggested that the rate rise by 0.25 percent amid a majority opinion for a freeze at 1.25 percent,” Governor Lee noted.

The dissenting vote, which is rare at such meetings, was interpreted by market as a warning of a change in the interest rate. The last such disagreement took place in April 2016 and two months later the BOK lowered the rate. 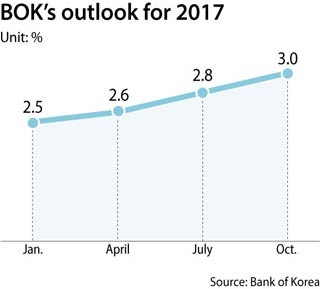 Lee also hinted it was time to raise interest rates, which have been at a record low for 16 consecutive months, a record stretch without change.

“Current economic conditions and the trend of inflation have been, to some degree, ripe to pare down an accommodative monetary stance, though [the Bank of Korea] needs some time to assess whether the state is temporary or longer term,” Lee said.

Previously Lee said the BOK would move away from rock-bottom rates only when it was assured that the economy was strong.

Lee said that exports and domestic consumption improved, with inflation nearing the central bank’s target of 2 percent, although downside risks remained for the economy, including the effect of China’s retaliations for Korea’s deployment of an anti-missile shield on trade and tourism.

The BOK nudged up its economic outlook for 2017 to 3 percent from the previous 2.8 percent, citing an expansion of facilities investment and improved consumption.

That revision follows the International Monetary Fund’s decision earlier this month to bump up Korea’s outlook to 3 percent, 0.3 percentage points higher than its last forecast in April.

“The governor’s statement assured the market that a rate hike in November is not a far-off idea,” said Lee Mi-seon, a fixed income analyst at Hana Financial Investment.

“Previously, the market projected that the Bank of Korea could raise the rate sometime next year, but the dissenting vote suggests a bringing forward of the timing,” the analyst said.

“The central bank allowed the market to confirm its intention of increasing the rate,” the analyst said.

“The minority opinion, the revision of the economic outlook and the governor’s hawkish comments will all work to increase the possibility of a hike within this year,” he continued, “Unless the North Korea risk intensifies by November, it is highly likely that the bank will move up the rate.”

Governor Lee’s term will last until next March and he will preside over three remaining monetary policy meetings.