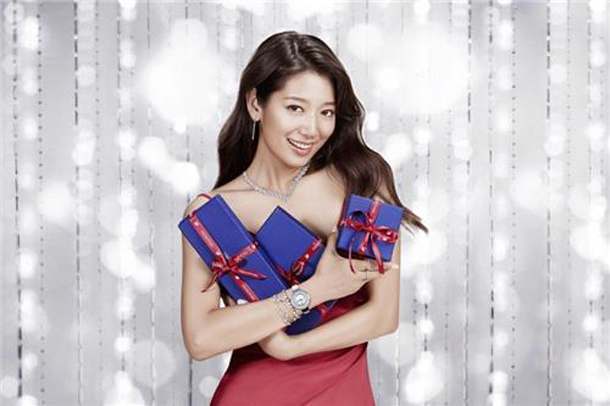 Actor Park Shin-hye has been appointed the global ambassador of renowned jewelry brand Swarovski, according to her agency S.A.L.T. Entertainment. She has been the brand ambassador of Swarovski Korea since 2016. Swarovski is an Austrian brand that specializes in precision cut crystal which was established in 1895.

With the news, Swarovski released new photos of Park holding gifts in a red dress and wearing crystal accessories from the brand. The image will hang in stores in more than 120 countries around the world.

Former global ambassadors for the brand include former Victoria’s Secret Angel and supermodel Miranda Kerr and American model Karlie Kloss. This is first time a Korean has been selected the brand’s global ambassador, and it is unconventional for an actress to be chosen instead of a professional model, according to Ilgan Sports, an affiliate of Korea JoongAng Daily.

An insider at Swarovski explained to Ilgan Sports that “[Park] has been the ambassador of Swarovski Korea since 2016, and through movies, dramas and charities she has not only spread her influence worldwide but has also showed her dynamism, which the brand pursues.”

Meanwhile, Park has been cast as a lawyer in the movie “Heart Blackened” which will be released in Nov. 2.