Machines won’t replace us, but they can divide

Machines won’t replace us, but they can divide 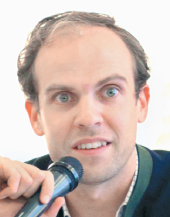 Machines will not be taking jobs away from humans in the near future, a prominent scholar of industrial automation said during a lecture in Seoul on Thursday.

Instead, the bigger problem will be technological developments exacerbating polarization in societies and between countries, Prof. Carl Benedikt Frey of Oxford University said.

The co-director of the Oxford Martin School for public policy is one of the most cited scholars on industrial automation. He was invited by the Institute for Global Economics, a Korean think tank, to deliver a lecture on the future of human labor in the fourth industrial revolution.

Frey said technology still has a long way to go to match up to human levels of creativity and social interaction. “Last year, a chatbot managed to convince 30 percent of human judges by pretending it was a 13-year-old boy speaking English as its second language,” he said. “But what you do in daily jobs is [even more complex] - persuading people to follow your ideas, negotiating deals and taking care of customers.”

The professor foresees many barriers to full-fledged application of mechanized labor, including the higher cost of robots compared to human labor, government legislation that might stall the deployment of machines and varying culture preferences. Robot caretakers for senior citizens might be acceptable in Japan, Frey said, but the same idea would cause an outcry in Sweden.

“A much bigger concern is whether the vast majority of the population will be reaping the benefits of tech development,” the professor said. The advent of computers has prompted the fall of the middle class because technology has automated their jobs, he noted, with statistics from high-income countries showing that people with college degrees are doing well, while middle-class workers are being pushed to lower-wage and lower-skill jobs.

Frey imagines that this will lead to further polarization, not only within individual societies, but also between countries. “What’s more is that these new skilled jobs are highly clustered in certain cities like San Francisco, Stockholm or Seoul,” he said. On the contrary, countries that still rely on cheap labor as their competitive advantage could fall behind.

“People that have lost on technology are much more prone to opt for radical political change,” Fry said, alluding to the election of Donald Trump as president of the United States. “They want anything but the status quo.”