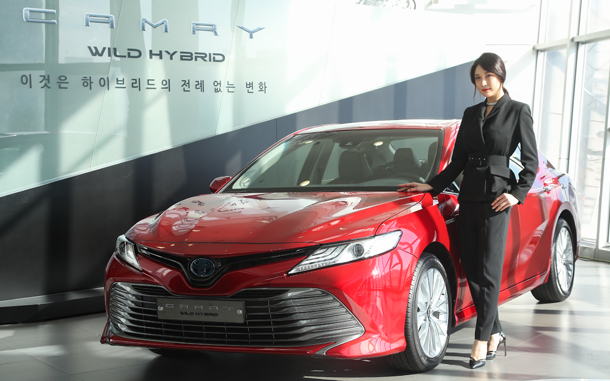 A model poses with Toyota’s latest Camry, which was introduced at the Some Sevit floating islands in the Han River on Thursday. [YONHAP]

A completely overhauled Camry, Toyota’s star model, was launched in Korea Thursday, and the company has high hopes for sales with growing demand for hybrids.

“Toyota’s sales in Korea grew this year thanks to the rising popularity of hybrid models,” said Akihisa Yoshida, CEO of Toyota Korea at a launch event held on Some Sevit, artificial islands floating on the Han River, on Thursday.

“I am sure that the new Camry will bring about renewed popularity for the Camry in Korea,” Yoshida added.

Toyota Korea touted an enhanced driving experience for its hybrid, a type of car often considered fuel efficient but deficient in performance.

“People no longer choose eco-friendly cars just for the high fuel efficiency,” said Kang Dae-hwan, sales and marketing director at Toyota Korea. “The new Camry follows the ‘wild hybrid’ agenda to offer a completely different driving experience. It is expected to overhaul not only the image of Camry but the brand image of Toyota as well.”

The company said the car’s lower and wider silhouette makes it more stylish and dynamic than the previous version. It is hoping the revamped design will appeal to a younger demographic of buyers.

“We are targeting the millennial generation with the new Camry,” the CEO said, “who pursue economic consumption as well as eco-friendliness.”

Toyota Korea expects total sales in Korea to increase 20 percent this year to reach 11,000 units. As of September, total sales were at 8,205 units which was 25 percent more than the same period a year ago.