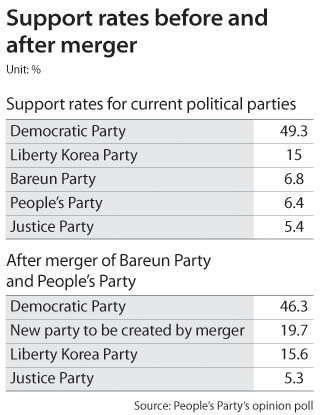 Discussions of a possible merger between the People’s Party and the Bareun Party gained momentum on Thursday as their leaders are sanguine about the prospect of a new political consortium.

Rep. Joo Ho-young, floor leader and acting chairman of the Bareun Party, said Thursday that he had discussions with People’s Party leaders about the merger and briefed the Supreme Council about the recent talks. “There will be an opportunity to ask opinions of our lawmakers and party members once we receive a more specific proposal,” he said.

According to Joo, he recently had a meeting with Rep. Kim Dong-cheol, floor leader of the People’s Party, on Wednesday. “He told me that many of the People’s Party lawmakers want a merger with the Bareun Party and asked me to check on our lawmakers’ intention,” Joo said during the Supreme Council meeting.

Joo said the two parties’ ideologies and policies largely overlap, and that the merger will allow reformist, centrist politicians to thrive. Joo also told reporters that during the weekend he met with Ahn Cheol-soo, the chairman of the People’s Party. “We explored the possibility of a merger,” Joo said. “Because it was our first meeting, we talked about situations of our own party and prospects of the Korean politics. We didn’t discuss the specifics on how the two parties will merge.”

As of now, the ruling Democratic Party has 121 lawmakers in the 299-member National Assembly and the main opposition Liberty Korea Party has 107 representatives. The People’s Party has 40 and the Bareun Party 20.

Joo’s meetings with People’s Party leaders came shortly after a public opinion poll on the merger was made public on Wednesday. The survey, conducted by the People’s Party last week with 1,000 adults nationwide, suggests that the two parties will win more supporters after the merger.

The Democratic Party scored 49.3 percent, the Liberty Korea Party 15 percent, People’s Party 6.4 percent, Bareun Party 6.8 percent and Justice Party 5.4 percent in the poll before the merger. After the merger, the new party will score 19.7 percent, 6.5 percentage points higher than the sum of the two parties’ ratings.

The survey also suggests the merger will move the new party up to second place. The Democratic Party will score 46.3 percent after the merger and the Liberty Korea Party 15.6 percent, the poll showed.

“We agreed that the importance of a centrist party is growing because the two major political parties are repeatedly failing in their politics,” Kim said Wednesday after meeting with Joo.

Joo also said he told Kim that the two parties have almost identical stances on issues, except for North Korea policies.

In an exclusive interview with the JoongAng Ilbo, Rep. Yoo Seong-min of the Bareun Party also said the merger will attract lawmakers from the Liberty Korea Party. The Bareun Party was created in January with lawmakers who defected from the Liberty Korea Party to sever their associations with the impeached President Park Geun-hye and her faction. Yoo was its presidential candidate in the May election.

“There were a significant number of lawmakers in the Liberty Korea Party who wanted to participate in reform of the conservative,” Yoo said. “They will want to leave, because the party is leaning more and more to right. They just didn’t have an opportunity until now.”