Koryoin burst into song outside Gyeongbok

Koryoin burst into song outside Gyeongbok 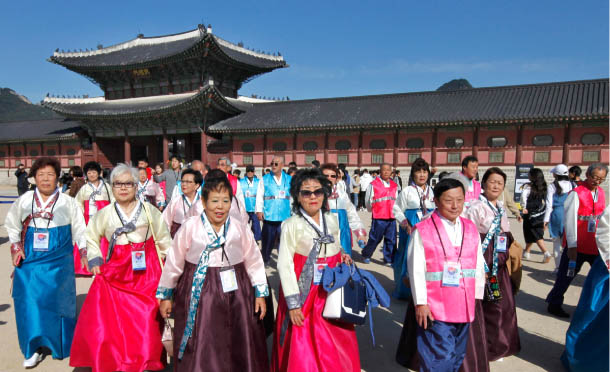 Passersby at the Gyeongbok Palace in central Seoul doubled back to see what was going on as about 50 people clad in hanbok, traditional Korean clothing, sang the song “Arirang” at the palace entrance on Thursday morning.

They were Koreiskie, or Koryoin, Korean nationals of former Soviet Union states. The performance was not scheduled, but one of them started singing and they all followed suit with orchestrated precision.

“I consider Korea my homeland,” said Shin Iskra as she walked the palace grounds wearing the traditional dress of Korea. “The first time I was here was in 1995. I keep coming back since then. I think this is my 12th visit.”

Shin is Uzbekistani by birth, the granddaughter of a Korean independence fighter named Jeon Il and daughter-in-law to the Koryoin painter Shin Sun-nam.

“The first time I came here,” she added, “I was attending a celebration for the 50th anniversary of Korea’s independence. That was quite special, as I know my grandfather fought for that.”

Shin started to paint under guidance from Shin, and noticed that her paintings changed the more she visited Korea. “My paintings, which used to largely show characteristics of Uzbekistan or Central Asian arts, now has a lot of Korean elements,” she said. “People back in Uzbekistan ask me why I’m incorporating these Korean elements into my works. It just happens, probably because of where I am rooted from.”

Shin is one of about 50 Koryoin who visited Seoul from Monday to today, as part of a program run by the Overseas Korean Foundation and Seoul Metropolitan Government. Many of them were visiting the country of their forefathers for the first time as they travelled in from Russia, Azerbaijan, Uzbekistan, Ukraine, Kazakhstan and Kyrgyzstan to parts of Seoul, including the Seoullo 7017 overpass park, Gyeongbok Palace and Namsangol Hanok Village, as well as the demilitarized zone outside Seoul.

“This is my first time in Korea,” said Khegay Nikolay, a third-generation Koryoin born in Primorsky Krai in 1932. “My parents and I were forced to move to Uzbekistan when I was 5.”

Though he said he cannot remember much of what he went through at the time, Khegay recalled that the fellow Koryoin who moved into the country with his parents were able to form a village together in Uzbekistan.

“I remember that it was difficult for Koreiskie to get into college at the time because universities then didn’t have any scholarships for Koreiskie,” he said. “So a lot of us, including myself, sought opportunities to study in Russia.”

Though it was the first time he was seeing Korea in 85 years, he said he always knew Korea was his homeland. “I visited North Korea in 2005 and I consider the two Koreas my homeland,” he said.

From the late 19th century to the Japanese colonial period, many Koreans migrated to the Littoral Province, just above North Korea, initially to flee the famine in northern Korea and later to prepare for independence movements against Japan. Others moved to avoid Japanese occupation and find a better place to live. In late 1937, former Soviet dictator Joseph Stalin forced some 170,000 ethnic Koreans in the Littoral Province to move to Central Asia.

Koryoin were further scattered in late 1991 when the Soviet Union collapsed. A host of ethnic migrants did not receive new citizenship during that process.

“This is the 80th year since Koryoin were forcibly relocated,” said Seoul Vice Mayor Kim Jong-wook. “Koryoin have weathered the drastic and harsh conditions and created a new history with an iron will. I hope that more Koryoin will continue to find Korea and find ways to bond with their homeland.”

“We’ve been running the program to invite Koroyin since 1998,” said Han Ji-won, media relations officer at the Overseas Korean Foundation. “We initially only invited first and second-generation Koryoin, but extended the program after 2014 to invite the third and fourth generations, too.”